The Volkswagen T-Roc, a SUV from Volkswagen, was launched in India in Mar, 2021. Volkswagen T-Roc has been discontinued in 2021. We are showing the last known price for T-Roc.

Powering the front wheels of the Volkswagen T-Roc is the 148bhp/250Nm 1.5-litre, four-cylinder TSI engine through a seven-speed DSG automatic gearbox. So, super-quick gear shifts are a given. It’s also got what VW calls active cylinder technology (ACT) that allows it to shut down two of the four cylinders at low engine loads to reduce fuel consumption. Also, this engine is a silent one, making it barely audible within the cabin unless you rev north of 3,000rpm. Now, when slotted in D-mode, one can smoothly drive about all day with the gearbox shifting at about 2,000rpm to keep the momentum going.

You’ll eventually figure out that the powertrain smartly uses its ample torque to hurriedly weave through the smooth cogs to sit at the tallest gear for best frugality. One of the highlights is that the turbo lag is hardly noticeable. But clearly, in Sport-mode, it displays a fierce persona as it upshifts close to the 6,500rpm redline and picks up speed feverishly; 0-100kmph in just under 10 seconds. Although we didn’t clock the drivability tests of 20-80/40-100kmph in kick-down, it certainly has a rapid air about it. This makes overtaking chores a breeze, be it in the city or on the highway. And did I forget to reveal that the paddle-shifters spice things up when you’re in the mood to drive fast?

Just like how Volkswagen vehicles are generally tuned, the T-Roc’s ride, too, feels a tad firm at slower speeds, but it never gets uncomfortable for the passengers. As the speeds rise though, the well-judged dampers go about absorbing most of the bumps and broken sections with aplomb, to the point where it feels rock-solid too. The slightly firm setup portrays very little roll, while also allowing this VW to stick fairly well to the intended line when you show it a set of bends. This trait is further complemented by a steering that’s reasonably direct in spite of being slightly slow around the dead centre. If only it was a tad quicker, the T-Roc would have been mighty engaging to drive. Nevertheless, the brakes have good bite and feel progressive at the pedal.

To start off, the first thing you’ll appreciate about its cabin is the commanding driving position. Now, although frontal and side visibility is almost spotless, the view out of the rear is restrictive. So, relying on the rearview camera footage of the contemporary 8.5-inch display, for the tighter situations, goes unsaid. Then, next on the list is my favourite virtual cockpit instrumentation which simply revels in the info-sharing department.

Another thing that needs pointing is the solid build quality along with the pristine fit and finish, both simply can’t go amiss. Sadly, this cabin should have had more soft-touch materials in use. Nonetheless, optimum utilisation of space has made it possible for VW to carve out adequate storage spaces all across. As for the front seats, while they are large and supportive, electric seat adjustments would have made a world of difference here.

The rear bench, on the other hand, is firmly padded for apt support and the backrest is appropriately angled for comfort. As for seating three, one needs to be wary of the bulging centre seat and the restrictive transmission tunnel. Moreover, leg- and head-room seem concerningly inadequate, and this is in spite of the front seatback and roof being carved out, to begin with. Be that as it may, the 455-litre boot space is not only up to the mark, the 60:40 split-functionality swells the flexibility quotient a few notches.

In terms of the safety net on the Volkswagen T-Roc, firstly, this compact SUV benefits from a five-star EURO NCAP rating for adult and child occupants. Additionally, it comes equipped with six airbags, ABS with EBD, electronic stability control, and a tyre pressure monitoring system. Then there are front and rear parking sensors with a reverse camera, lane assist, and head-on-collision warning (with braking).

The T-Roc’s overall design rhymes with what anyone can envision to roll out of Volkswagen’s design studios. It is the German understated elegance at best. Sure, that fancy yellow shade can turn heads, but otherwise, it’s the T-Roc’s simplistic styling that attracts. Don’t mistake me, its unfussy design language may not earn it the presence of a Compass, Hector, or maybe even the Creta. But it does matter to those who prefer exquisite subtleness.

The Volkswagen T-Roc succeeds in looking handsome, is adequately loaded with features and safety equipment, has a smooth engine along with an acclaimed transmission, is dynamically sorted, and also benefits from the great German build quality. On the downside, the second row could have been more accommodating and there are no 4x4 or diesel mills on offer for those who cover a lot of miles. That aside, the Rs 27.27 lakh (OTR Mumbai) price tag puts it in the Jeep Compass territory. What would I buy? Well, I’m the bling-bling kind, so it’s the Jeep Compass for me any day!

Find a list of all 1 petrol versions of Volkswagen T-Roc. This table includes on-road price which covers all costs like RTO and Insurance.

Note: ALL Volkswagen T-Roc 1.5 TSI have been discontinued.

German car manufacturer Volkswagen sells the T-Roc compact SUV in India via the CBU route. The vehicle is sold in limited numbers and is available in a single top-spec version. The T-Roc is based on Volkswagen’s MQB platform and is one of the most safety-feature rich options in its segment.

Volkswagen T-Roc gets a typical family face with two slats finished in black that are flanked by elongated LED headlamps. The LED DRLs are positioned lower down on the front bumper. The lower half of the bumper features a honeycomb mesh pattern and a silver bash plate to enhance its rugged character. The sides are highlighted by 17-inch alloy wheels and a chrome border above the window line. The wheel arches are neatly designed and give it a sporty stance. The rear is uncluttered and features split LED tail lamps with a strong crease line joining the two clusters.

The T-Roc gets premium leather upholstery and the cabin is equipped with a 10.25-inch touchscreen infotainment system with Apple CarPlay and Android Auto connectivity. Additionally, the vehicle comes with all the bells and whistles in the form of a reverse parking camera, keyless entry, and heated front seats, six airbags, tyre pressure monitoring system, dual-zone climate control, electronic parking brake with auto-hold, and heated mirrors.

The Volkswagen T-Roc is powered by a 1.5-litre TSI petrol engine that generates 148bhp and 250Nm of torque with Active Cylinder Technology (ACT). This engine comes mated to a seven-speed DSG unit.

The on-road price of the Volkswagen T-Roc in Delhi starts at ₹ 21.35 Lakh for the petrol engine.
Volkswagen T-Roc is a 5 seater car with 5 doors.
Yes. Sunroof is available in 1 T-Roc versions. 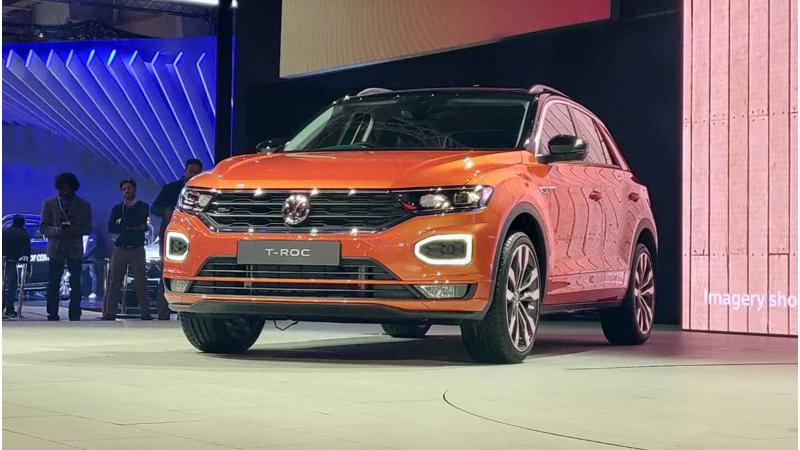 Volkswagen T-Roc to be reintroduced in India on 1 April

Volkswagen T-Roc&nbsp; Volkswagen India will kick start the SUVW strategy in India with the re-launch of the T-Roc SUV. The T-Roc made its debut last year in March and only 1,000-units were 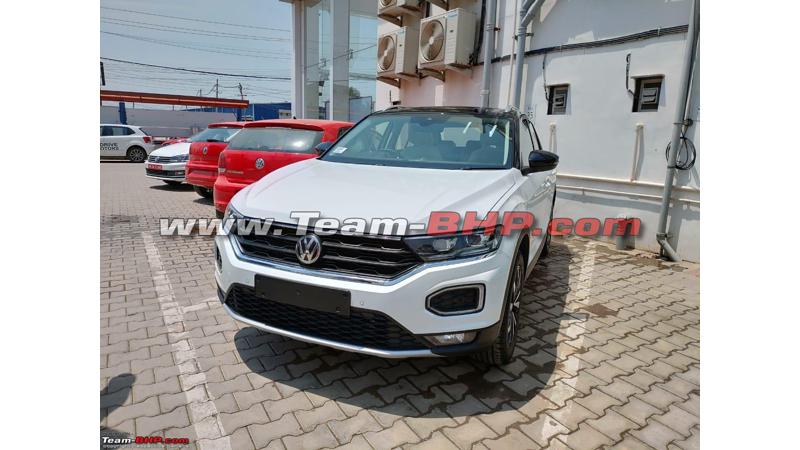 Volkswagen T-Roc arrives at dealerships&nbsp; German car manufacturer Volkswagen had launched the T-Roc in India on 18 March 2020. The SUV was introduced in a single top spec variant at an

Volkswagen T-Roc Volkswagen has re-launched the T-Roc SUV in India with an ex-showroom price of Rs 21.35 lakh. To be brought in the country by the same CBU route, the T-Roc is now Rs 1.35 lakh

Volkswagen T-Roc sold out in India

Volkswagen T-Roc The Volkswagen T-Roc has been sold out and the company has closed the booking window for the model. The T-Roc, which was imported into the country via the CBU route, was