The Volkswagen Jetta is a sleeper – a car with great abilities hid under the undramatic fascia. Volkswagen has reworked the Jetta for the Indian auto market and has added a bit of drama –something that the Indian car buyer loves. The front fascia now features a Passat-like chrome front radiator grille, larger air intake and reworked bumper. The bi-xenon headlamps are also new, equipped with the company’s flagship Adaptive Front Lighting System (AFS). However, the technical configuration of the car remains same. Notably, the company has retained all its variants, including Trendline, Comfortline and Highline, in order to give several options to buyers.

In the present scenario, the new Volkswagen Jetta competes against the likes of Hyundai Elantra, Skoda Octavia, Chevrolet Cruze and the Toyota Corolla Altis in the Indian market.

Further to this, read Volkswagen Jetta Road Test details by our expert.

The Jetta has typical sedan lines with a defined hood, ten cabs and a distinct boot. Both front and rear profiles of the car have received customizations, which together offer it a unique look. The headlight cluster now has daytime running lamps integrated and the radiator grille gets three chrome horizontal slats. The profile is accentuated by its length and the new design of the alloy wheels. The boot remains almost the same but with a few nips and tucks.

The new Jetta features a new three-spoke steering wheel, adding to the sporty feel of the cockpit. The top variant (with automatic transmission) sports paddle shifters behind the steering wheel, offering additional convenience to the driver. One can now find high-gloss black accents, especially in the cockpit. There is a new touchscreen infotainment system, which features 6-CD changer and eight speakers. It must be noted that the German auto maker has also retained a number of comfort features from the erstwhile model like cooled glove box unit, dual zone 'Climatronic' automatic air conditioning unit, heat insulating glass in side & rear windows and electrically operated windows and outside mirrors.

As far as safety is concerned, all the trims of the new Jetta have almost same features like hill hold control, electronic differential lock, six airbags and engine and transmission guard. Along with that there is an advanced Electronic Stability Control (ESC) function and Anti Slip Regulation (ASR), which helps the car stay stable in any road condition. Cruise control is also offered in the new Jetta as a standard feature across all the variants.

Volkswagen Jetta is offered with an option of both petrol and diesel engines. The petrol version comes equipped with a 1.4-litre TSI engine, which has a displacement of 1390 cc. Based on direct fuel injection system, this engine churns out a maximum power of 120bhp with a maximum torque of 200Nm. On the other hand, the diesel trim gets a 2.0-litre TDI engine, which has a displacement of 1968cc. Based on common rail direct injection technology, the maximum power produced by this engine measures at 138bhp. In order to transmit the torque output to its front wheels, the auto maker has equipped a six speed manual transmission system in the petrol version of Jetta, whereas the diesel trims are offered with an option of either six speed manual or DSG automatic gearbox.

The 1968 cc Diesel - powered variant delivers a fuel economy of 16 kmpl in city and 18 kmpl on highways, while the Petrol variant offers a mileage of 12 kmpl on urban roads and 14 kmpl and freeways, respectively.

Find a list of all 2 petrol and 4 diesel versions of Volkswagen Jetta. This table includes on-road price which covers all costs like RTO and Insurance.

The new Jetta is surely a lot better than before. It features sharper lines on the outside and a dash of luxury add-ons inside. But the real deal lies inside the hood where the 2.0L TDI engine sits. We take a deeper look at this new offering.

The once popular D-Segment of cars, which were a symbol of more power, more features and more luxury, lost its importance with the advance of feature rich less expensive offerings sitting at a segment below. The regular batch changed their preference giving larger weightage to convenience and of course lucrative pricing of such smaller cars but is it fair to think of them as a suitable replacement? 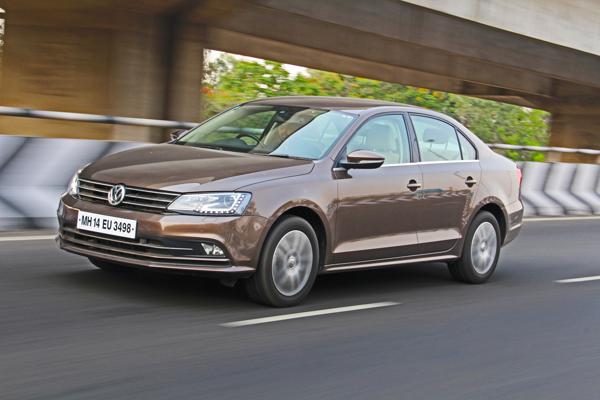 The new Jetta is surely not as it is better than before. It features sharper lines on the outside and a dash of luxury add-ons inside. But the real deal lies inside the hood where the 2.0L TDI engine sits. We take a deeper look at this new offering.

This is the second time that Volkswagen has updated the second gen Jetta as the first one happened in 2013. The new version too doesn’t get loads of changes but minor tweaks to make the Jetta sold in India resemble its international counterparts with a furthermore sleek design than before. 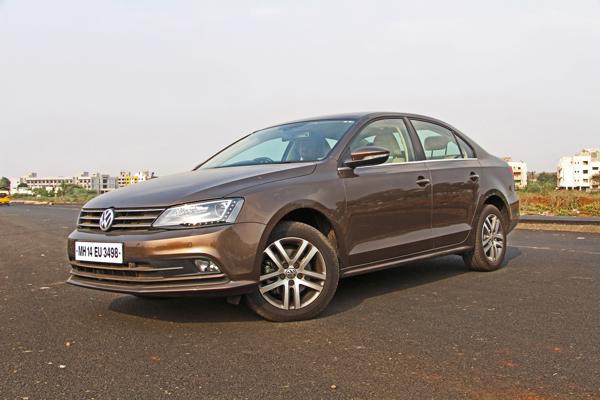 To make sure the New Jetta looks wider, VW has altered the previous grille and made way for a new triple slat chrome embellished version. This gives a broader front car stance with a neat display. The headlight outline is narrower as it sits at the extreme corner, also acting collinear with the new grille. It features day time running LEDs arranged in an array running along the border of the headlights. The front bumper gets a revised fog lamp positioning.

The length of the new car remains same as there aren’t any significant changes done to the side profile. The five-spoke alloy wheels surely drop in a hint of performance which gels well with its elegant stance. The rear boot lid has been retouched with a new lip which integrates a spoiler in it. The tail lamps too have got an update with more detailing inside the assembly. Also to make the car appear wider, the lines and creases have been removed from the rear bumper. 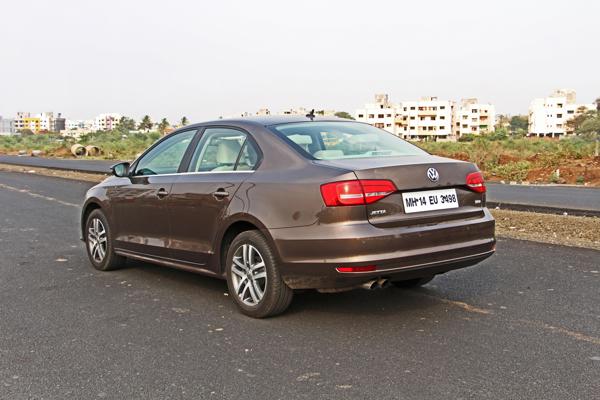 The interiors of the new Jetta too feel understated as Volkswagen doesn’t believe in jazzing it up. Instead, the strong built quality paired with the sophistication leave a positive impression. 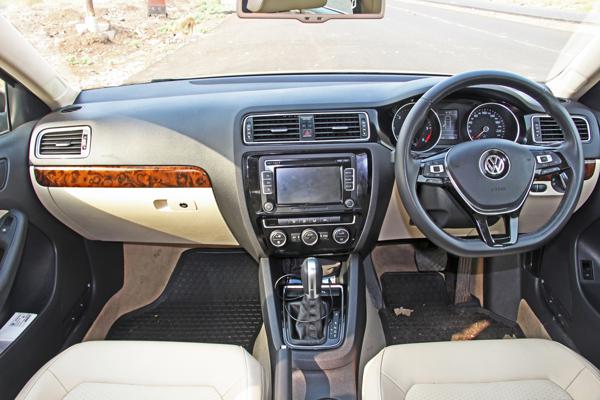 Firstly, it borrows the same flat bottom steering wheel as seen on the recently updated Polo and Vento series of cars. It features controls to access the multi information display on the instrumental console as well as buttons to operate the central infotainment screen. The MFD inside the chrome rimmed cluster has been updated as it now shows cleaner and crisper display. The addition of fatigue alert, which computes between the different inputs given to the steering wheel, cautions the driver with the help of a subtle chime.

The front dashboard also gets a faux wooden strip running along its width as well as on the door trims. It might not appear in sync with the understated style but then its presence grows on you, which also remains to be a subjective choice. The contrasting colour combination of beige and ebony looks interesting especially as it is complimented by the silvers and greys of the button along with the tree bark themed brown strip on the trims. 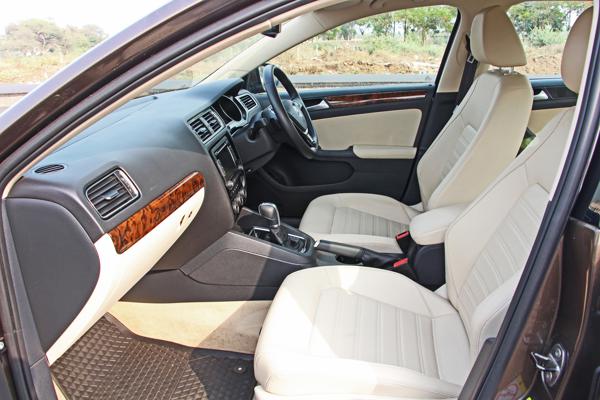 The rear passenger space is comfortable with well cushioned seats and adequate support. The driver’s seat feels more equipped with electrical adjustments while the front passenger is left to adjust his seat with the help of a mechanical lever. The rear central armrest gets twin cup holders and a litre class storage option on door trims. The new Jetta also gets a generous boot space of 510L 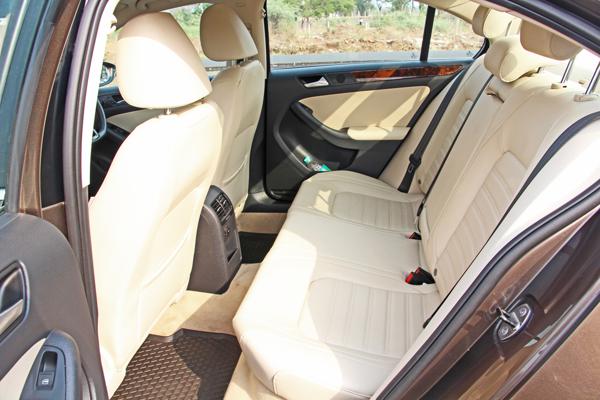 The 2.0L TDI powering the new Jetta is a power unit as it has a unique mix of efficiency and performance. It is unlike any other engine in this segment and is a strong contender to be the best in the segment. It is also used in varied configurations across the range from VW stable. 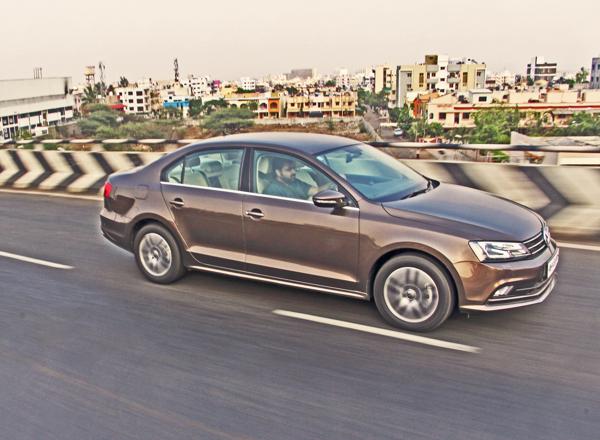 In terms of performance, almost all VW cars rule the game and therefore we did expect the Jetta to impress us with its performance. The torquey diesel motor offers its peak across a wide range of engine speed starting from as low as 1750 rpm. It definitely comes in handy on highways especially at tricky situations which demand an urgent surge but then it also is useful inside the city where the engine is strained to perform at low speeds. 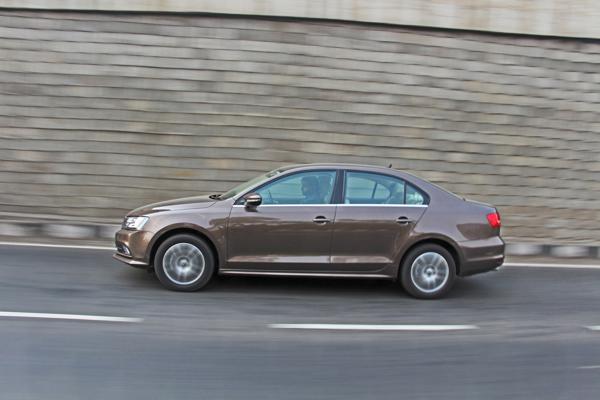 It offers three driving modes. The automatic is the best inside the city as it is quick to sense the throttle response and immediately upshift or downshift as and when necessary. Then there is the manual mode, which is more for the spirited and adventurous kinds. Using the well tucked shifter paddles behind the steering wheel, the shifting pattern totally depends on the driver. This is the most enjoyable mode as the DSG is extremely quick and precise to shift gears. Even the engine speed alters quickly to reduce the intermittent lag. Ride and handling continues to be a forte as the suspension settings haven’t been changed. It does feel a bit heavy around corners especially if you enter at a higher speed but then it still manages to hold on to the tarmac giving enough confidence to be pushed further. In addition, the Electronic Stability Control along with Anti slip regulation (ASR) and Electronic differential Lock (EDL) make sure the vehicle remains in control. It also manages to absorb all the disturbances from the tarmac and isolate the cabin from them.

The new facelift does not make it a new car but even then the Jetta has been one of the best in the segment. No other car in this price range offers such an impressive ride and handling. It is only in terms of features, where the Jetta falls back. If one can manage to overlook it, this is indeed one impressive luxury sedan. 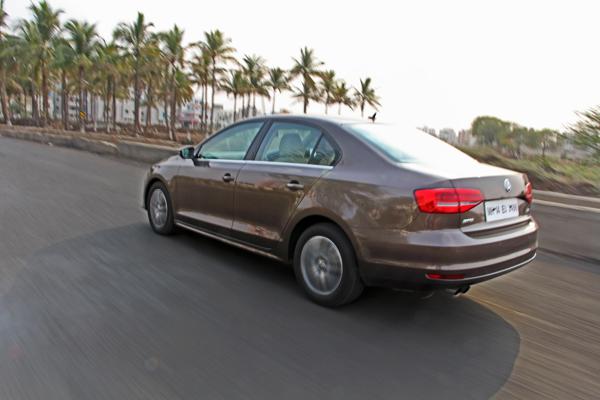 Note: Specifications for Jetta Trendline TSI have been mentioned At the ongoing 2018 North American International Auto Show in Detroit, Volkswagen unveiled the 2019 Jetta for the international market. Along with more space and creaturely comforts, the Volkswagen Group reportedly has announced three separate recalls in the US and Canada. The recall, involving up to 3.34 lakh Audi and VW models, has been caused by possible fuel leaks with different Some of the major Indian manufacturers have agreed to produce BS-VI fuel compliant cars from April 2020. However, they have a few demands that they expect to be fulfilled by the

The Volkswagen T-Roc SUV will make its debut on August 23 and ahead of the unveiling, the German automaker has released a teaser that showcases the process and people that went into making the car.

German automaker Volkswagen has silently introduced an upgraded touchscreen infotainment system that seems to be borrowed from the Beetle. Soon the company also plans on unveiling the Ameo sedan