Porsche Cayenne Coupe is available in India in two engine options the V6 and the V8. The base version is powered by a V6 engine, while the Turbo version gets a V8 engine. The Cayenne Coupe is sold in India as a completely built unit (CBU) in India and will be identical to the European model.

The Porsche Cayenne Coupe distinguishes itself from the regular SUV with a sportier Coupe-ish stance. The roof edge is lower by 20mm and the A-pillars are slimmer than the Cayenne. The Cayenne Coupe looks muscular with redesigned door and fenders.

The Porsche Cayenne gets premium upholstery with carbon and Alcantara accents. As compared to the Cayenne, the rear seats in the Cayenne Coupe sit 30mm lower. The vehicle offers 625-litres of boot space. Most of the interior detail is similar to its SUV sibling.

Under the hood, the turbocharged petrol V6 engine produces 340bhp of power, while the twin-turbo V8 churns out 550bhp. Both engine options come mated to an eight-speed automatic gearbox and both these versions feature an all-wheel drive system.

Find a list of all 3 petrol versions of Porsche Cayenne Coupe. This table includes on-road price which covers all costs like RTO and Insurance.

Note: Specifications for Cayenne Coupe Base have been mentioned 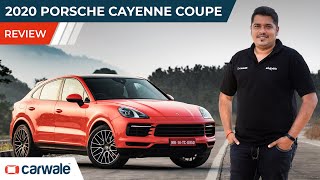