Mahindra XUV500 is available in four variants and seven colour options. The SUV last received a cosmetic update in 2018, while the BS6 engine option was introduced in the country last year. The XUV500 is one of the most feature-rich SUVs in its segment.

As compared to its predecessor, the updated Mahindra XUV500 has received a new grille and redesigned headlight with distinctive detailing. Moreover, the DRLs now sit on top of the headlights as opposed to the S-shaped light guide. The sides look familiar with large alloy wheels and a strong shoulder line. As for the rear, it gets the triangular-shaped taillights that extend towards the tailgate.

Find a list of all 1 petrol and 19 diesel versions of Mahindra XUV500. This table includes on-road price which covers all costs like RTO and Insurance. It’s been seven years since Mahindra brought out the XUV500 as their flagship car. Sitting at the top of the Mahindra PV hierarchy, it’s always been a showcase for what to expect in future Mahindra cars and this

It’s been seven years since Mahindra brought out the XUV500 as their flagship car. Sitting at the top of the Mahindra PV hierarchy, it’s always been a showcase for what to expect in future Mahindra cars and this new car for 2018 is no different. Now called the ‘Plush New XUV500’ it’s a big change for the SUV both in terms of appearance as well as mechanically, with the latter taking place for the first time. Here then is our take on the new car. 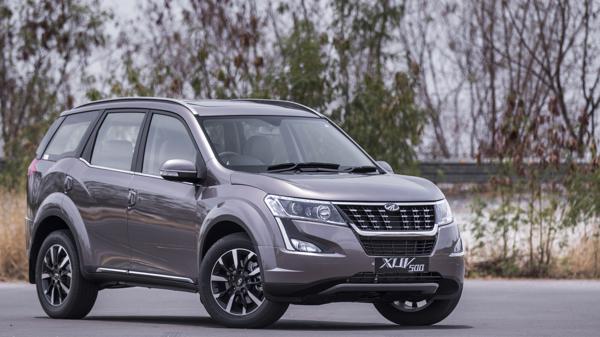 Just once glance at the XUV500 and your eyes are instantly transported to the large chrome grille. It’s a contemporary bling heavy six-slat unit and has been fitted in place of the cheetah inspired setup on the outgoing model. There’s chrome surrounds on the grille as well as chrome inserts in the fog lamp housing. 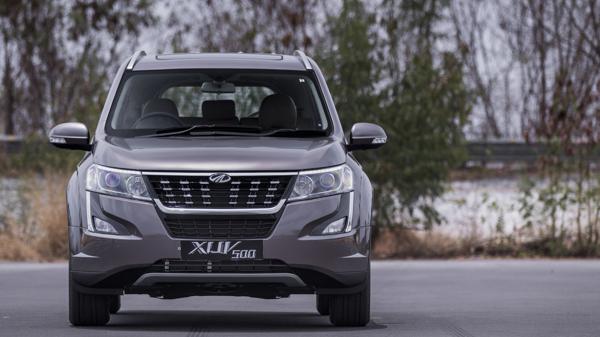 Move over to the side and you can see that the XUV500 remains unchanged and on this top-of-the-line W11 variant that we drove, you get new 18-inch diamond cut alloy wheels, two-tone roof rails and a black cladding that runs around the car. 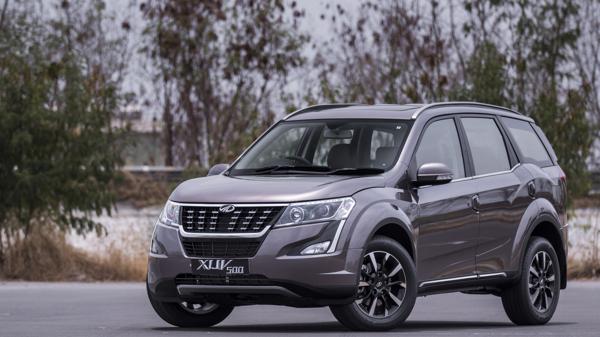 The rear has a got a significant boost in terms of appearance and the biggest change here is with the tail lamps. The units are wrap around and despite being larger than the light package on the outgoing model, it does look compact. The tailgate’s changed too and it gets a muscular ridge above the number plate holder. 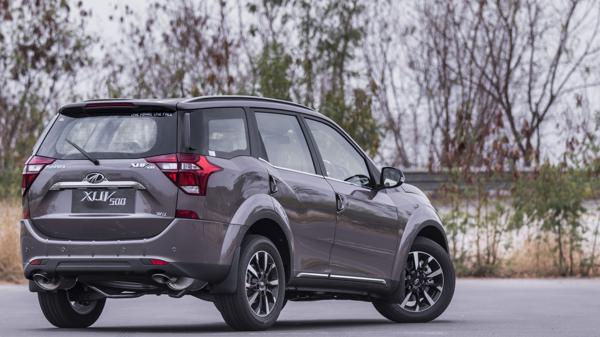 The 2018 XUV500 remains unchanged in terms of dimensions, space, features list and storage options. The new feel then comes in the form of individual elements of the cabin being updated. In this new top-of-the-line W11 variant, parts of the dashboard and all the arm rests have been covered in faux leather while the centre console gets a piano black finish. You now also get tan leather quilted upholstery and it looks premium. What’s not changed though are the quality of plastics. They feel hardwearing and given how quality in the segment has jumped significantly even since the launch of the facelift in 2015, it’s time Mahindra raises their game in this regard. The XUV500 that we drove gets the 2.2-litre mHawk four-cylinder diesel motor that’s been powering the XUV range for a while now. Its output has been bumped from 140bhp and 320Nm to 155bhp and 360Nm and can be had with a six-speed manual or a six-speed automatic. 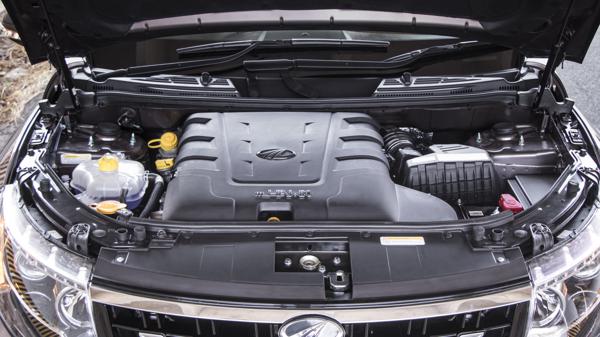 During our brief sojourn at Mahindra’s test track, we could tell that the increase in power and torque has made a noticeable difference to the way the XUV500 behaves. You get off the line faster and have to put in less effort when you need to make a quick overtake. The addition of a new eVGT (electric variable geometry turbocharger) to reduce turbo lag at the lower end of things is one of the main factors that has helped the increase in performance.
There’s also a good mid-range which has boosted the car’s cruising ability. In the real world, this means you should be able to knock off the kilometres out on the highway without affecting the fuel efficiency or your pace. 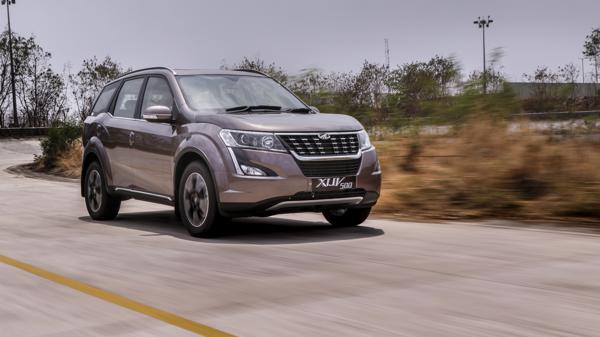 That being said, the refinement from the 2.2-litre motor is still below par from what is expected in cars in this part of the market these days. It’s quite audible even at idle and fills the cabin with a gravelly rattle as you begin to up the pace. You can also get the XUV500 with petrol power. It’s 2.2-litre four-cylinder engine also producing 140bhp/320Nm and is offered only with a six-speed automatic. 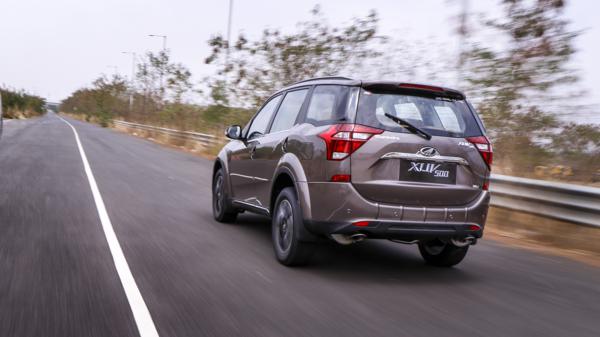 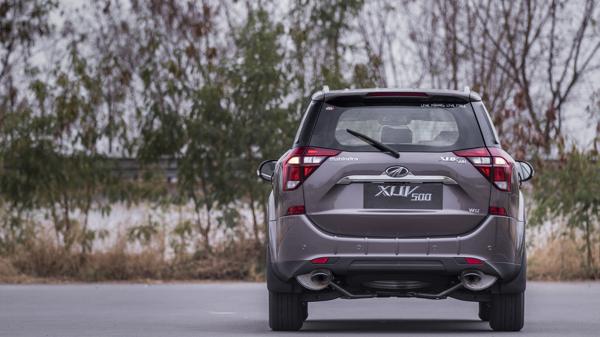 The XUV500 has always been big on presence, features and the new additions raise the stakes in terms of what to expect from cars in this part of the market. The bump in output is a welcome addition and in the real world, it’s expected improve the experience of going wherever you need to go without much fuss. Its biggest rival is the Tata Hexa but it also takes on certain lower spec variants of the Jeep Compass and Hyundai Tucson. Among, sedans, the Toyota Corolla, Hyundai Elantra and the Skoda Octavia are its chief contenders.

The on-road price of the Mahindra XUV500 in Delhi starts at ₹ 16.16 Lakh for the petrol engine.

No. 4x4 drive option is not available in any of the 20 versions of the Mahindra XUV500.

Note: Specifications for XUV500 W3 have been mentioned XUV700 Mahindra's new flagship SUV, the W601 has been officially named the XUV700. It will be officially launched for the Indian market Q2 of FY2022. It will be launched with petrol, diesel