The Mahindra NuvoSport, a SUV from Mahindra, was launched in India in Apr, 2016. Mahindra NuvoSport has been discontinued in 2019. We are showing the last known price for NuvoSport.

The Mahindra NuvoSport is the latest compact SUV that replaces the sub-four metre Quanto. This SUV promises a sporty appearance, moving away from the Quanto’s MUVish looks. And, under the revised body shell is the new Scorpio’s platform. Additionally, apart from the modern style updates and new features, Mahindra is also offering an AMT gearbox in its automatic trim. So we took this variant out for a quick spin to check how efficient and convenient this transmission is.

First up is the most vividly done part – the fascia. The black grille with vertical slats is in line with Mahindra’s new design language. The quirky looking eyebrow-like LED DRLs above the angular headlamps do add a bit of flair. Then, there is the air scoop on the tall bonnet and the neatly sculpted front bumper with a blacked out lower half. All this has brought out the much-needed transformation. Furthermore, the honeycomb mesh pattern and the silver faux bash plate add to the sporty aura.

Moving on to the side, the Quanto resembling silhouette is well enhanced by the 16-inch five dual-spoke pattern alloys and black body cladding. Apart from the smoked tail lamps, the rear section is the same as the Quanto, reminding you of the chopped off Xylo look.

Due to the tall stance, you will need to climb onto the strong side footstep to enter the cabin. And once in the upright driver’s seat, you can adjust it for reach, recline and height (in two steps), eventually giving you a good commanding position. However, the overall ergonomics could have been better. The arm rest comes in the way while buckling up the seat belt. Also, the new 6.2-inch touch screen system is pretty big, but placed low and not inclined to towards the driver, making it inconvenient to use. Mahindra has tried enhancing the interior quality with some silver and grey accents, but it hasn’t worked well. The plastic quality is patchy and still looks cheap for its segment. Thankfully, the points lost for quality are made up by the practical cabin with oodles of space.

The instrument cluster looks basic, but is clear and functional. Like in the Quanto, the multi-information display is also mounted up in the centre on the dashboard of the NuvoSport. We would have liked this MID to be incorporated in the instrument cluster, as it would prevent the driver from taking his eyes off the road. Otherwise, it nicely displays the speed, DTE, temperature, time and the automatic or manual modes. Although there is no reversing camera, you do get parking sensors with a display in the mirror that helps in parking the huge SUV easily. The second row of seats can be reclined, have good thigh support and are wide enough to accommodate three people comfortably. On the other hand, the third row of seats are impractical as they offer minimal shoulder room and no seat belts. The good part is that with these seats up, more than 400litres of boot space is available with a low loading height. And the middle seat can be further folded to liberate more than 850litres of space.

The NuvoSport gets the 1.5-litre mHawk100 engine from the TUV300. This is tuned differently and delivers 100bhp of power and 240Nm of torque. As this AMT variant misses the power and eco mode, as in the manual trim, all of the power and torque is at your disposal all the time. Thankfully, there is no sudden outburst of energy or surge of power when you stamp the accelerator. Like in the manual version, there is minimal turbo lag, power delivery is linear, but the slower shift times make the automatic variant 4.44seconds slower than the manual in the 0-100kmph run. In the automatic mode, the gear shifts just above the 2,000rpm when driven in a dignified way. But, once you put your foot down, it allows you to rev till 3,500-4,000rpm, after which it changes gears on its own. Similar is the case in the manual mode as it up shifts post the 4,500rpm mark. With torque available from as low as 1,600rpm, the in-city driveability is good.

In terms of ride and handling, the NuvoSport is better than the Quanto, but some niggles still exist. For example, the SUV still nose dives on braking and has a lot of side to side movement of passengers making them uncomfortable. The 1,675kg vehicle rides good at slow speeds, but at high speeds it does feel top-heavy. The brakes have enough bite, but lack feel and feedback.

On the positive side, the NuvoSport is much better to drive than the Quanto, thanks to the new ladder-based platform. The soft suspension takes every terrain into its stride. So the NuvoSport is a good vehicle to tackle the Indian road conditions. The light steering helps manoeuvering the car in traffic and makes parking an easy task. Then the biggest advantage comes with the AMT gearbox, which adds to the convenience with clutchless gearshifts. Sure the gearbox takes some time to respond making one plan his moves especially before overtaking. However, this AMT transmission eases things to a large extent. It is a perfect tool for stop-and-go traffic.

The Mahindra NuvoSport will appeal to people looking for a vehicle that has modern looks, spacious cabin, robust built and is easy to drive. At an ex-showroom price of Rs 9.10 lakh for the N6 AMT (ex-showroom New Delhi), it makes sense for urban buyers who would want to take away the burden off their left leg. But for people looking to go out on the highway more often, the manual version will be a better deal at an affordable price tag.

Find a list of all 6 diesel versions of Mahindra NuvoSport. This table includes on-road price which covers all costs like RTO and Insurance.

The Mahindra NuvoSport replaces the Quanto in the Indian manufacturers’ SUV portfolio. The new urban SUV has been built on the new Scorpio platform that is lighter and supposedly more agile than the previous platform.

The NuvoSport is available in three basic trims - N4, N6 and N8 with N8 being the top-spec. The sub-four-metre SUV is aimed at the urban SUV buyers who look for a car that looks butch but with the practicality of a compact car.

Further to this, read Mahindra NuvoSport Road Test details by our expert.

The NuvoSport is a body on frame SUV unlike its monocoque competition. While the front fascia is new, the side profile and the tail-gate are unmistakably Quanto. Mahindra has tried to get around an aggressive front with eyebrow-like pilot lights above the swept back headlamps and the vertically slatted black front grille. The blacked out bumper with the silver finished faux bash-plate gives it a butch look. The interiors will be modern and on the lines of the new Mahindra cars. The cabin will be spacious thanks to the upright sitting and tall boy design.

Mahindra has given occupant safety its’ due importance. ABS and EBD with dual front airbags is standard across all variants except for the N4 where you can opt for the safety package. Power steering with tilt adjustment and power windows are standard. A 2-Din music system is available from the N6 trim with the top end N8 getting a 6.2 inch touchscreen unit. The top-spec car gets daytime running lamps, 16inch alloys, rear spoiler, reverse parking sensors and height adjustable driver seats.

The three-cylinder m-Hawk engine from the Quanto continues to perform its duties under the hood of the NuvoSport. The 1.5-litre three turbocharged diesel engine develops 100bhp of power and 240Nm of torque. The engine is mated to a five-speed manual gearbox and is also available with an AMT.

Suspension has been retuned and the NuvoSport is expected to handle better than the outgoing Quanto. Being a body on frame car, the weight will be considerably higher than competition in spite of the weight savings done in the new Scorpio platform.

The braking duties are performed by the disc brakes in the front and the drum brakes in the rear. All variants except the base N4 get ABS and EBD.

Apart from the base N4 trim, all variants get ABS, EBD and dual front airbags as standard. For the N4, the safety package can be opted for and the variant is called N4 Plus.

The NuvoSport gets fresh, aggressive looks but at the end of the day is a remodelled Quanto. Even the dashboard is reminiscent of the Xylo as against the expected resemblance to its sibling the TUV 300. The engine is a bit more powerful and the handling has been slightly improved.

The NuvoSport is breaking into the extremely competitive sub-four-metre soft-roader SUV segment that is being taken over by the Vitara Brezza storm and the recently updated Ford Ecosport. Mahindra has priced the NuvoSport at a premium over its own TUV300 in the fray.

Mahindra NuvoSport, a SUV, is available from ₹ 7.98 - 10.49 Lakh in India. Mahindra offers the latest NuvoSport in 6 versions in India. The base model N4 starts at ₹ 7.98 Lakh in Delhi and the top model N8 AMT priced at ₹ 10.49 Lakh in Delhi. If you are looking for 7 seater car then you should consider NuvoSport. 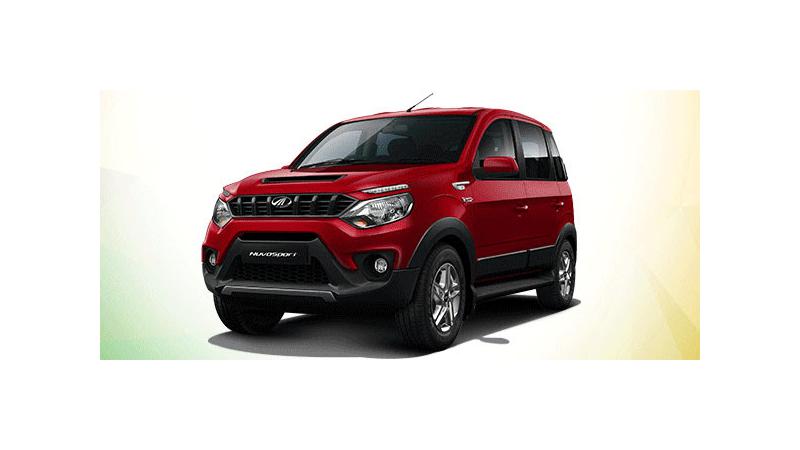 Mahindra Nuvosport offered with benefits up to Rs 57,000 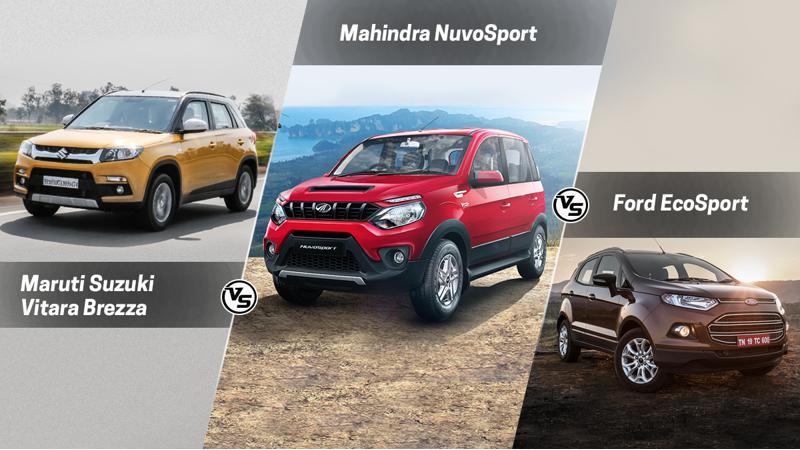 Introduction:- The burgeoning compact SUV segment is one of the hottest places in the Indian car market today.&nbsp; Nearly every major player today has a participant or will have one by next 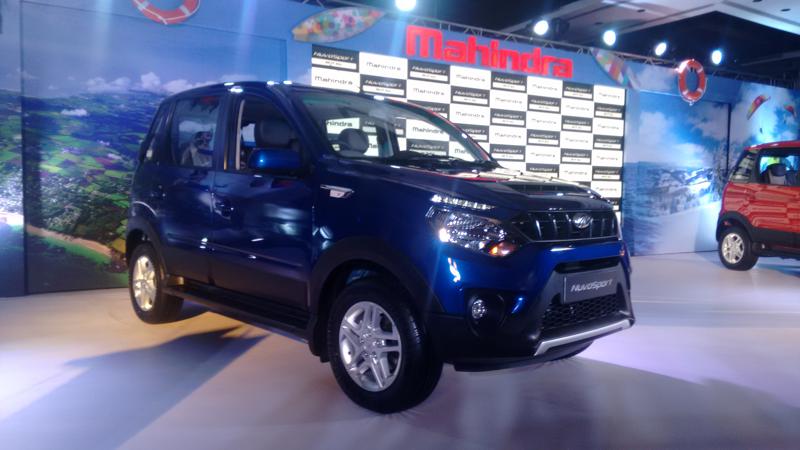 Mahindra NuvoSport indicates at future design for next Xylo

The Mahindra NuvoSport has been launched in India for Rs 7.42 lakh (ex-showroom Delhi). It is the Mumbai-based automaker&rsquo;s second entry into the sub four-metre SUV segment after the TUV300

Mahindra offers accessories to spruce up the NuvoSport

For those who are wanting to make their Mahindra NuvoSportlook a bit different from the standard SUV, the carmaker has a long list of accessories on offer. We bring to you a list of all