Jaguar, the British car maker known for its sleek and fast cars, is looking for the greener pastures of the SUV market. While it is dubbed by Jaguar as the ‘ultimate practical sports car, the F-Pace is a true-blue modern SUV. Brought in as the C-X17 concept at the 2013 Frankfurt Motor Show, the F-Pace has made its entry in the Indian market.

For its price tag, the Jaguar F-Pace competes with a wide range of cars starting from the Mercedes GLE 250d and the BMW X3 for the 2.0-litre mill while it challenges the Porsche Macan and the GLE 450 AMG Coupe with its top-spec First edition.

Further to this, read Jaguar F-Pace Road Test details by our expert.

The F-Pace is a typical Jaguar and carries the trademark mesh grille with the feline logo as well as the sweptback headlamps which resemble the eyes of its namesake. Adding to the brawn are the louvres on the bonnet and dashes of chrome which emerge prominently on the front bumper.

On the side, we can see the SUV origins of the vehicle in full form thanks to the high ground clearance, rear sloping roofline and flared wheel arches. The rear is without a doubt Jaguar-like, thanks to the switchblade style wrap around tail lamps and shape of the rear glass, similar to the F-type. What is new, however, is the bumper as well as the pseudo bash plate element into which the quad tailpipes have been integrated.

The cabin is a leather-lined space filled with high-quality plastics, wood inserts and a chrome-heavy centre console. Standard features across all trim levels include a touchscreen infotainment system, contrast coloured seats, full-digital instrument cluster, four-zone climate control and of course, their famous rotary gear knob. It gets a five-seat layout with a specially made 650-litre boot including special underfloor trays for extra storage as well as space for a full-sized spare wheel.

For safety, it gets six airbags standard across the range along with traction control, hill-hold and hill-descent functions and an intelligent all-wheel-drive that can manage the SUV on most terrains.

Jaguar is offering the F-Pace with two diesel engine options – the 2.0-litre inline four turbodiesel and the 3.0-litre V6 turbocharged engine. The 2.0-litre mill develops 177bhp of power and 400Nm of torque and comes with the entry-level trims. The 3.0-litre V6 belts out 296bhp of power and a massive 700Nm of torque and is offered with the R-Sport and the First Edition trims. Both engines are mated to an eight-speed manual gearbox that sends power to all four-wheels depending upon the torque demanded.

Jaguar may introduce petrol engines in the future, but for now, the leaping cat on steroids is already on the prowl.

The 1999 cc Diesel - powered variant delivers a fuel economy of 14 kmpl in city and 16 kmpl on highways.

Find a list of all 2 petrol and 5 diesel versions of Jaguar F-Pace [2016-2021]. This table includes on-road price which covers all costs like RTO and Insurance. The world has shifted its focus from sedans to SUVs and crossovers. So when a company like Jaguar develops an SUV, that’s a confirmation of this paradigm shift. People want vehicles with better ground clearance, bold

The world has shifted its focus from sedans to SUVs and crossovers. So when a company like Jaguar develops an SUV, that’s a confirmation of this paradigm shift. People want vehicles with better ground clearance, bold looks and big wheels. Now, the F-Pace doesn’t just meet all those requirements; it’s also got the DNA of a sports car and that puts this car a notch above others. This Jaguar has three main ingredients – practicality, excitement and exquisiteness – which makes the F-Pace one of the most desirable vehicles to own. We spent two days soaking up the F-Pace experience and also uncovered some interesting details. 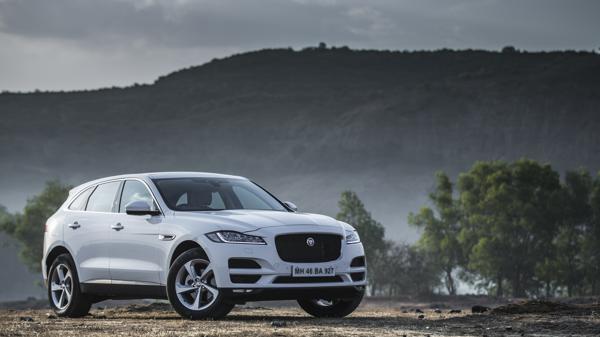 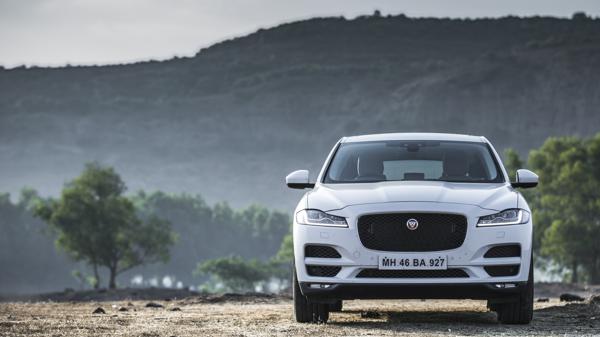 One thing is for sure, the F-Pace screams out Jaguar from all the angles. The large grille on the fascia is the most obvious resemblance. The slim but aggressive LED headlamps are the other traditional Jaguar bits. There’s a slight bulge on the hood which makes this vehicle look aggressive. When viewed from the side, the rearward sloping roofline, the flared wheel arches, big doors and the plastic cladding at the lower section remind you that this is a big SUV. The rear end of the F-Pace is simply beautiful. The clean design approach, F-Type inspired tail lamps and rear windscreen transform the F-Pace from a gleaming metal body into a truly beautiful machine to look at. In short, the F-Pace is easily one of the most stunning creations in the world of SUVs. 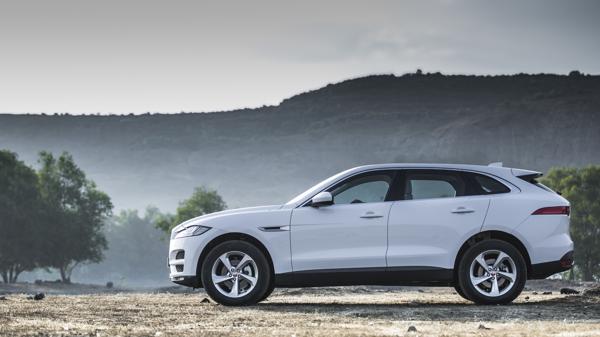 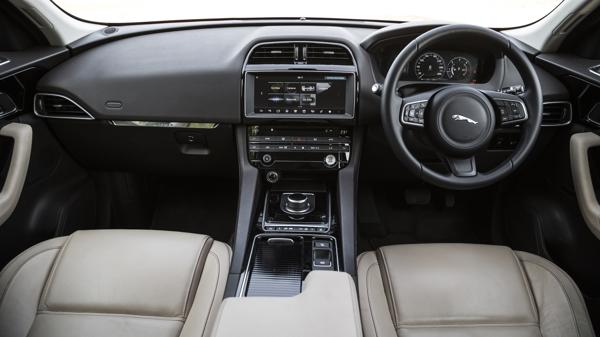 While Jaguar has left no stone unturned to make the F-Pace exterior as attractive as possible, it did cut some corners with the interiors. The cabin inside, unfortunately, doesn’t feel as if you’re stepping into an Rs 90 lakh vehicle. There’s none of that experience of feeling special and pampered – something which we have all grown to expect from luxury SUVs.  The F-Pace is based on the XE platform, so a lot of things are shared with this sedan. That’s why the interior is identical to the one in the XE. The overall layout is quite elegant. 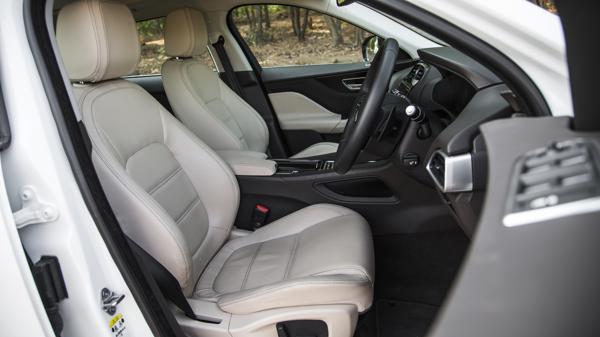 The steering wheel with integrated buttons, large infotainment system and the placement of the operational buttons are all well laid out. This infotainment system is home to some really nice interfaces, however, the touchscreen isn’t engaging and intuitive enough. The massive digital instrumentation feels good to look at, especially at the extreme left section. That’s where you get to see the basic version of the navigation system that is enormously helpful for long hauls. While we have spoken good things about the dashboard, let’s get to the disappointing bit – plastics. Unlike the dashboard, the plastics used on the lower half of the cabin isn’t great. In fact, it shouldn’t even be included in such an expensive vehicle. The placement of the windows and rear view mirrors switch are uncomfortably high. This is a result of the vehicle design, but it is possible to get used to it. Other bits like the rotary knob, storage space and automatic climate control are standard across the variants. 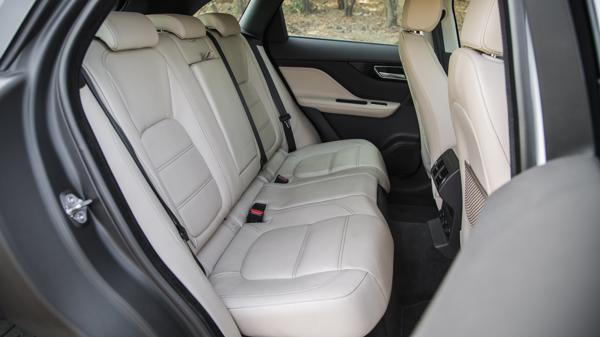 The contrast coloured leather seats are high-mounted which offers good visibility of the road and the surroundings. The seats are large and offer great cushioning and comfort. It can be electrically adjusted too. However, it misses out on the lumbar support, which would have been appreciable for a sporty SUV like the F-Pace. The rear seats offer plenty of shoulder and headroom too. In fact, there is even decent leg room for a six-footer like me. These seats can be folded flat in 40/20/40 format to offer maximum flexibility.  The rear passengers have dual-AC vents, two USB and a single 12V charging sockets to play with. The boot capacity is 650 litres, but the full spare wheel takes up much space, as a result of which, the boot looks quite small. However, you could get a whopping 1740 litres of luggage space, if you dispense with the second row altogether. 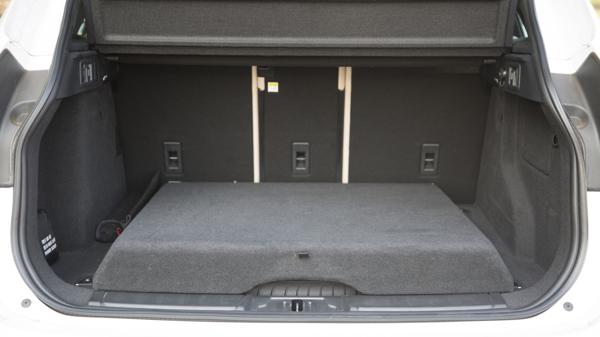 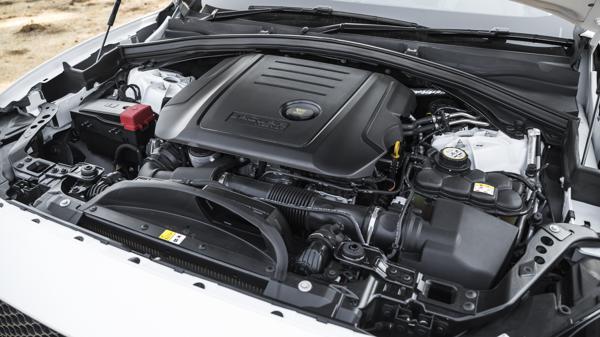 We’ve already driven the F-Pace with the 3.0-litre motor. But under the hood of this one, there’s a 2.0-litre Ingenium diesel engine– Jaguar’s new all-aluminium powerhouse that will power all its cars. But at first, the very thought of a small 2.0-litre diesel engine powering an 1830kg crossover, boggles the mind. The truth is that the 177bhp that is generated by this engine is adequate. This mill churns out a healthy torque of 430Nm at 1750rpm, and thanks to the ZF eight-speed gearbox, the driving experience is good. The motor behaves well with linear power delivery and there is no sudden surge at any rpms. The vehicle reaches triple digit speeds very quickly and has the ability to stay there for hours without any stress. In the city, this motor feels brisk and does have a fun factor attached to it. The torque heavy motor helps the car cruise at 130kmph in as low as 1900rpm. But post 3000rpm, the engine tends to get noisy and the motor demonstrates its limitations. The harshness starts to creep in and the NVH isn’t great. As a result, the overall experience isn’t the finest at high speeds. Post 4000rpm, this small motor struggles to generate top-end power. 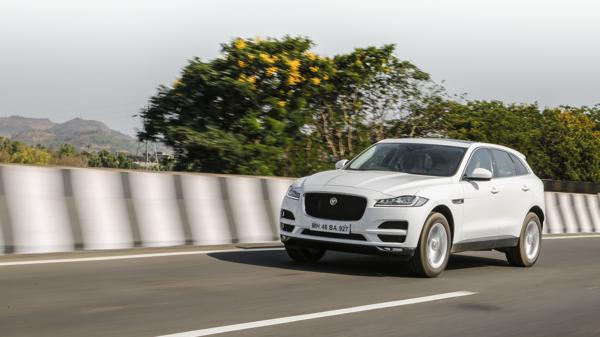 The gear shifts are smooth and responsive. This gearbox coupled with the torque spread makes overtaking an effortless job. It also has an S (sports) mode which is quite exciting to be in as the vehicle stays in the higher revs to get the maximum acceleration. The F-Pace is loaded with driving modes – eco, normal, snow and the most engaging one – dynamic. In dynamic mode, the throttle response is more accurate, the steering feels precise and the gearbox works harder. The ride is on the stiffer side, but isn’t back breaking. This has made the Jaguar an excellent handler. The SUV feels committed and offers outstanding handling in all the driving situations. Quick directional changes is a piece of cake for this Jaguar and that is where you get the feeling that this vehicle is nothing like a traditional SUV; it’s more like a beefed-up sports car. 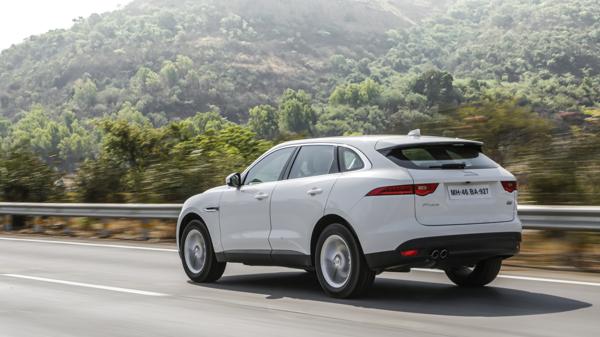 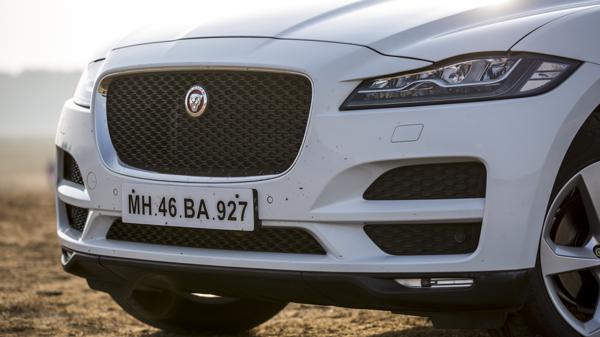 The Jaguar F-Pace doesn’t come cheap. For its price, there are a few SUVs in the market that offers two additional seats and that means more practicality. However, none of these vehicles offer the kind of driving pleasure the F-Pace does. This SUV is for those enthusiasts who are looking for a practicality of an SUV and handling of a sports car. Sure, the 2.0-litre motor doesn’t offer the best top-end performance, but you do have an option to choose the F-Pace with a 3.0-litre motor. The 2.0-litre delivers good fuel-efficiency and that’s what a lot of Indians want. Priced at Rs 79.03 lakh (ex-showroom Delhi), the F-Pace gives you an exclusive design and an opportunity to own an SUV which is actually fun to drive. 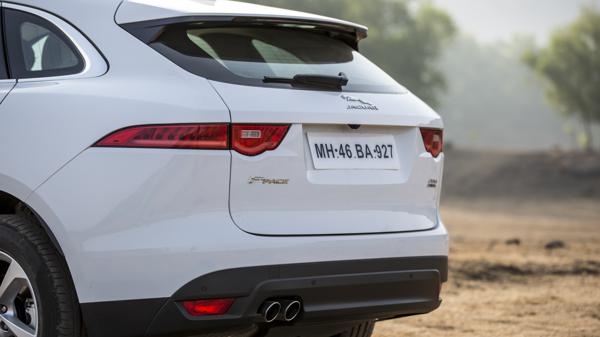 Note: Specifications for F-Pace [2016-2021] Prestige have been mentioned Jaguar-F-Pace-petrol Jaguar Land Rover has introduced a petrol derivative of the F-Pace in India for a price of Rs 63.17 lakhs. The petrol version is offered in Prestige variant and is powered 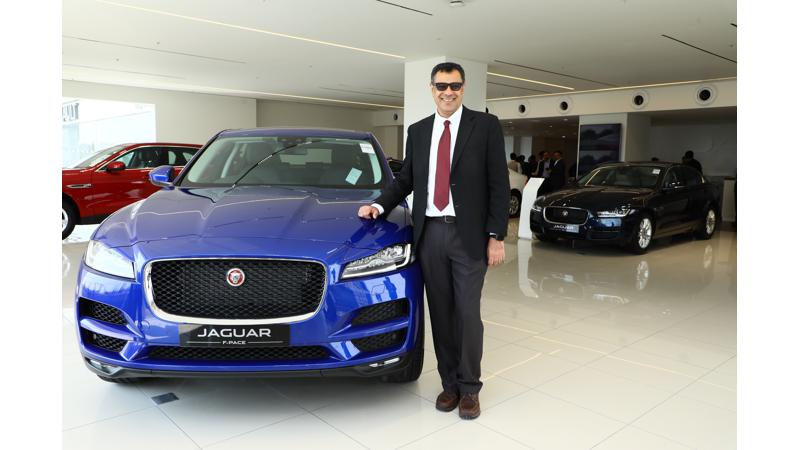 Jaguar Land Rover has collaborated with Lexus Motors to open a new showroom in Kolkata. The new facility will sell both Jaguar and Land Rover vehicles. Lexus Motors is located in the Rajarhat area 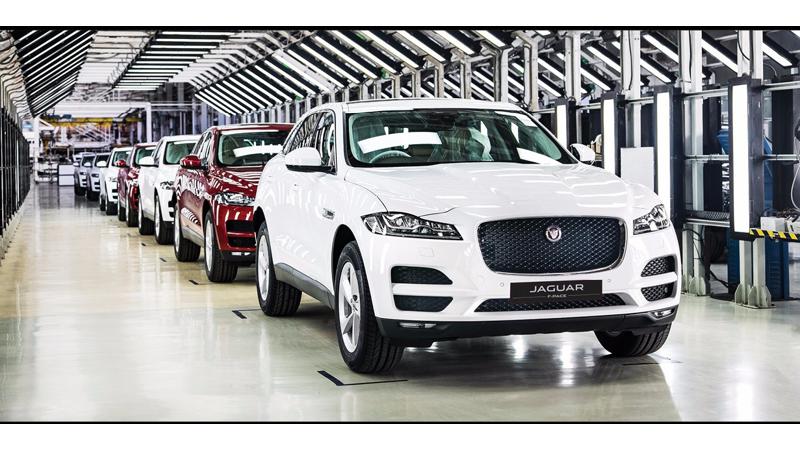 Jaguar Land Rover India has introduced the locally manufactured F-Pace in India at Rs 60.02 lakhs (ex-showroom pan-India). The diesel Prestige variant is the first model to be manufactured at the

Lister cars, the popular British motorsport car tuner claims that the company will roll out the world&rsquo;s fastest SUV. The upcoming SUV, a retuned version of the Jaguar F-Pace SVR will compete

Euro NCAP has awarded a five-star rating for Jaguar&rsquo;s performance SUV, the F-Pace. The SUV has also won the 2017 World Car of the Year title. The performance SUV has scored 93 per cent for