4.1 Be the first one to write a review Audi A8 has been discontinued in 2022. We are showing the last known price for A8.

Check details of the latest A8 L

Born as the luxurious flag bearer, the Audi A8 has never missed an opportunity to impress the comfort and luxury seeking kinds. While rest of the world was busy swooning over the new generation S-Class, Audi took a step ahead to make sure its kingship is retained.

The new A8 has got a dapper upgrade. It makes more power than before and comes with more comforting features. It also promises to take you generations ahead with its latest innovation of Matrix headlamps which make use of 25 small individual light-emitting diodes.

There is so much that has gone into making the new A8 feel a class apart that it can take a day or two to completely memorize all the new additions and options. Instead of spending time reading about it, we chose to get a real feel of it.

What does the new A8 L teach us? It teaches us that an understated design can leave an astounding impact too. It seems that the new A8 L seeks inspiration from crime thrillers and serious German dramas with its intensely cold looks.

Since this was my very first with the premium Audi, the design made me take few interesting notes of it. Firstly, it looks very much like other Audis but as they say, the beauty is in the detailing. The most impressive feature which is an optional trait and can set you back seriously is its Matrix headlamps. Working inside are 25 small individual light-emitting diodes per unit that can be switched on and off or dimmed individually as needed resulting in phenomenal 966,105,422 different configurations of illumination.

The single frame radiator grille along with the new front bumper now has more sculpted elements than before. All the seven horizontal slats inside the grille are finished in chrome and so are the profile lines running along the lower width of the front bumper. The long bonnet too does away with character power lines to drop a hint of what’s inside.

The length of the A8 has gone up too and is now an S-Class rivalling 5265mm. Available as a long wheel base edition only; the amazing length of the A8 paired with a shorter height makes it look unique. Another sporty addition is the 7-spoke alloy wheels. Officially, the 60 TDI gets 235/55 R18 tyres but the press car came in with more impressive R19 tyres.

The lines on the boot have been revisited with fresher and wider looking tail lamps. It now gets sequential dynamic turn indicators. The segments of the LED light band are illuminated in turn within milliseconds, creating a pulse of light that runs outwards in the direction in which the car is turning. The rear bumper too has got new contours and edges. The sleek chrome exhaust openings merge neatly with the bumper.

Inside the new A8 L you are greeted with some of the finest and most luxurious trims, leather and stitches. You can possibly spend a complete week sitting with the sales executive telling him what and how you want in your individually customised A8. Audi is not shy of offering multiple options and the number goes to 23 interior leather colours and 12 wooden inlays. Customers can also opt for personalized headrest logo. Who would have thought of that?

The cockpit view is as ravishing as an ideal expensive Audi car should be. This one also felt special as it had ‘India Edition’ carefully etched on the aluminium finished scuff plates. They have managed to out beat themselves by pushing the mark a bit further. The matured yet contemporary styling of the interiors will attract a certain kinds for sure.

The twin pod analogue instrumental cluster has a neat layout with central information display. It gets a heads up display along with navigation view on the cluster. Move on the central console and there is everything you need to control and shuffle almost anything. The famous MMI system is at its gentle best alerting the occupants about different vehicle settings and then there is MMI Touch, which has a touchpad screen and can identify inputs of characters and numbers.

I wonder if anyone would mind hearing music through 19 loudspeakers including sub woofers each with its own ampliﬁer channel with a total output capacity of 1400watts. To make it sound more convincing, we are talking of a Bang & Olufsen Advanced Sound System, which obviously features as an optional among the millions of options to choose from. It comes as a standard only on the W12.

Apart from all these expensive toys and buttons and controls, the other reason to get one of these expensive limousines is the comfort offered. One can literally sink inside the efficiently and cosily bolstered seats. The rear occupants can get their reading glasses on and work on laptops as it gets twin charging points conveniently located beside the long stream of central console flowing from front to the rear. There are foldable trays, cardan swivelling reading lights with LEDs etc.

After a tiring day of signing cheques and seeing presentations, it might feel superbly comfortable to surrender to those rear seats as it also gets a pneumatic massage function as well as seat ventilation and seat heating. There is a 4-zone deluxe automatic air conditioning for the rear occupants. You can also have an Individual choice of colour for the ﬂoor mats. Why would anyone want to get out of this car?

If you believe in the old school thought of ‘There is no replacement for displacement’, then the A8 L is surely your ride. Unlike its competition trying to get major numbers from smaller diesel engines, the A8 uses a 4.2L V8 making it the most powerful diesel car in India.

The updated motor now makes more power than before at 386bhp. Even the number of Newton metres that this one makes has gone up which now stands tall at 850. That’s enough torque to make one sit upright while driving enthusiastically on straight lines and not just sink inside the driver’s seat with boredom.

Agreeably, the A8 L is a luxury limousine. It gets the best in terms of everything to make the occupants feel spoilt with the ultra rich options and trims to choose from. This should have made Audi go easy on the performance bit of this car but contrary to my belief and everyone’s perception, the A8 L can do serious stopwatch shattering timings compared to its rivals by touching a speed of 100 km/h in 4.6 seconds, which also happens to be 0.1 seconds quicker than the insane 6.3L FSI variant.

How do you get that much of torque from the engine to reach the surface, there is a very simple solution to it. The A8 comes with a standard torque sensing Quattro permanent all wheel drive system, which gauges the needs of the situation and immediately transfers drive force to each individual wheel. The Quattro paired with Sport differential, which if offered as standard, does help in active driving.

Doing the job of whipping all those horses is the ZF sourced 8-speed Tiptronic transmission with crisp Shift quality, be it downshifting through revs or hurried upshifting, the box doesn’t act confused and is very swift to change the ratios. The shifter paddles behind the wheel are handy but giving more character to the shifts is the aircraft take-off lever styled gear selector mounted on the central console.

The adaptive air suspension intelligently senses the surface before changing the settings on individual wheels so that the disturbances caused by the undulations do not reach the cabin. This is also complimented by the fantastic cabin insulation which doesn’t let any foreign noise penetrate the cabin. Meaning even if there is a war happening outside and the roads aren’t good, the occupants will remain immune to the outside world.

The gigantic proportions of the A8 might feel discomforting while inside the city but surprisingly it isn’t. Convenient manoeuvrability makes dodging city traffic an easy task. It also comes with a 360 degree view with multiple cameras located at different points.

Once done tackling the built up side of a city, the highways was where the A8 is eager to be on. It gets Audi Drive select with vivid modes to choose from comfort, dynamic, auto, efficiency and individual which allows to change the vehicle’s characteristics by adapting the power steering assistance, accelerator and gear changing characteristics and the adaptive air suspension. The Dynamic setting, needless to say, makes the car feel sportier with agility as prime focus while in the comfort mode, the setup shifts towards softer settings. In the efficiency mode, fuel consumption takes over as everything else gets compromised.

The A8L weighs a hefty 2170 kgs which is quite a lot but then the endless list of equipments paired with an elephant of an engine will obviously make the car weigh on the opposite side of piddly. Interestingly, the weight is not a log to haul on straight lines as the stability is amazing. Keep shifting through those cogs of Tiptronic unit and it keeps on building momentum. The only area where the A8 reminds you of its size is around corners; where the front nose sticks straight and acts stubborn to change directions. It does not feel as confident on turns as on straight roads.

Why should you buy this ultra expensive Audi? For starters, there are infinite customization options which include 100 exteriors colours and a great number of interior trim permutations. This gives you a complete access to one of the finest in the class. The other merit is obviously the uniqueness of every car as you can even get your own logo stitched on the seats.

You shall never be late for any meetings, as the 4.2L V8 owns the title of being the most powerful diesel car in India. Some might argue that its closest rival looks better and is more modern but then they would also agree that a younger Brad Pitt doesn’t even come remotely close to an iconic Marlon Brando, whose cold looks and lesser words earned him a cult.

Find a list of all 1 petrol versions of Audi A8 L [2018-2022]. This table includes on-road price which covers all costs like RTO and Insurance.

Audi is all geared up for the launch of its 2022 A8L facelift in India on 12 July, 2022. The ‘L’ in the name A8L denotes a long wheelbase as it gets an additional 130mm of wheelbase than the standard A8. This fourth-generation facelift of the flagship saloon features mild exterior changes along with a new iteration of the MIB software.

The A8L comes with Audi’s latest MIB3 iteration for the driver display and touchscreen infotainment system. With the facelift, the carmaker also offers a pair of 10.1-inch screens for the rear passengers and a touchscreen controller placed in the rear armrest.

The India-bound 2022 A8L facelift may be powered by a 3.0-litre, bi-turbo, V6 petrol engine with a mild-hybrid functionality. Audi A8L teaser out ahead of India launch

It's a mid-life update for Audi's flagship sedan 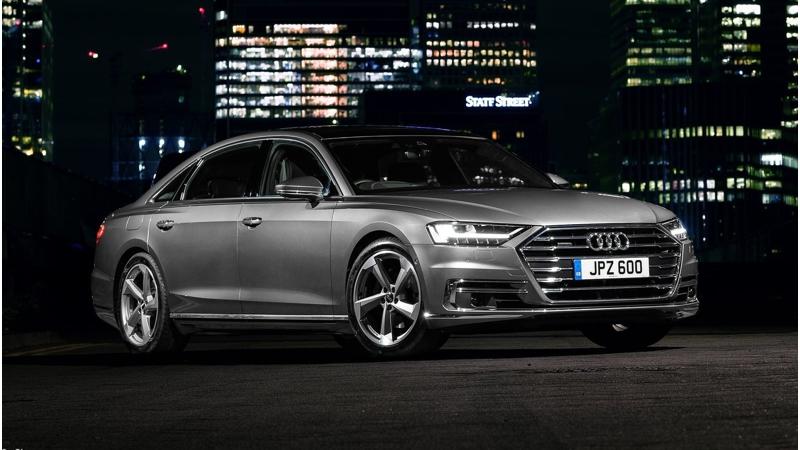 Audi A8L to be launched in India in February 2020

New Audi A8L Audi India will launch the A8L in February 2020. The company will also be launching the Q8 flagship SUV on 15 January 2020. The flagship sedan from Audi, the new A8L will arrive in

New-gen Audi A8L launched in India&nbsp; Audi India has launched the new-gen A8L in India priced at Rs 1.96 crores (ex-showroom). Only in India in the long-wheelbase guise, the fourth-gen of the