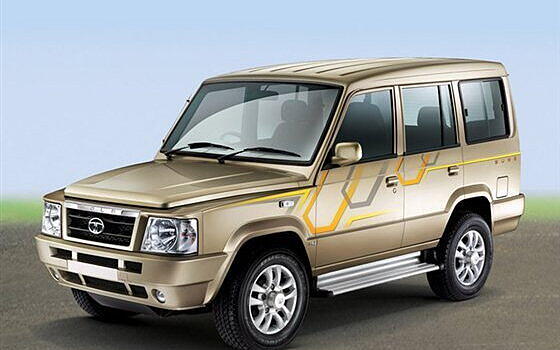 Tata Sumo has been discontinued in 2019. We are showing the last known price for Sumo.

Tata Sumo Gold happens to be a sports utility vehicle, which is specially designed for several on-and-off road uses. The success of Sumo fleet of models can be ascertained with the fact that it has been in the market for almost two decades now as it was originally introduced in the year 1994. Over the years, the car has been well accepted by the Indian audience sustaining in several spaces ranging from taxis to government vehicles and police cars. Tata Sumo Gold is a tall and heftily built vehicle, which exudes the muscularity design similar of other models like Hummer.

The designing language used at the exteriors of Tata Sumo Gold is far beyond fulfilling the basic needs. The lines used at the front fascia are rigid and less sensual, unlike the present day sports cars. Sumo Gold adheres to old fashioned grounding in its looks, but it never wavered from its core make. The front bumper of the car is wide and sinks lower towards the ground, in order to provide a decent aero dynamicity. The grille used at front is quite dominating, which is propped on either side by rectangular headlights with company's moniker fitted in the middle. The air ducts are wide and sit below the grille, which are meant for providing a proper air circulation to the engine. The roofline is much bigger in comparison with other same segment models. At the rear end, the car comes with the taillamp cluster sourced from its erstwhile model. A spare wheel is fitted at the centre of tail gate, giving the car a more distinctive appearance.

The interiors of Tata Sumo Gold are designed using rich black linen. This fabric means more of appeal and a refined classiness. The seats of this vehicle are large and well laid as well as comfortable, meant for a decent occupancy. The seating arrangement in car is commendable with sufficient space for 6 people. The dashboard houses a stylish instrumental cluster with a ring of chrome, which appeals to a nice design for the occupants. For the convenience of driver, a tachometer is present which grants him a full control of the car. Features like power windows are present in the car, which aid the fluctuating preferences of the passengers. The window glasses are tinted in order to maintain the temperature inside the cabin.

The car is replete with all the basic necessities like windshield wiper at both front and rear. With the presence of rear defogger, the driver can have a clear visibility from the rear windshield. Being termed as a decent SUV, the car boasts of several other essential elements of convenience as well like a spare wheel below the floor. The occupants are offered a 12V power outlet at the center console. The presence of anti-glare rear view mirror offers both security and comfort. There are cup holders and mobile holder on the glove box lid.

Tata Sumo Gold comes equipped with a power packed 3.0-litre CR4 engine, which has a displacement of 2965 cc. This performance oriented engine churns out maximum power of 83 bhp, along with a highest torque of 250 Nm. With these output figures, Sumo Gold achieves a top speed of 146 kmph, which is quite decent considering the designing elements and purpose of this SUV.

The engine of Tata Sumo Gold is designed to withhold a larger load and in order to maintain its stability, it has been equipped with a special suspension system. Therefore, despite less figures of output, Sumo Gold is a vehicle that performs at par with most of the driving credentials. The vehicle assures a superb experience owing to a strong built. The steering type is rack and pinion that ensures a better drive ability and stability on Indian potholes.

The 2596 cc Diesel - powered variant delivers a fuel economy of 14 kmpl in city and 16 kmpl on highways.

Tata Sumo Gold is a well built car, and safety is the foremost thing auto maker has kept in mind while designing it. It consists all the fundamental credentials that the cars of nowadays are required to match. Sumo Gold comes replete with fog lamps in order to offer an enhanced visibility during dark. Along with, the car has a decent braking and suspension system, which ensures a better stability and handling. Advancements like tight seatbelts, airbags cushion, impact protection, collision absorption technology, door ajar warning system and seat belt warning are present in the car. Along with, the car also comes loaded with side intrusion beams and high mount rear stop lamp.

Tata Sumo Gold efficiently competes against the likes of Mahindra Scorpio. Both the models are placed in same segment and deliver edge-to-edge performance against each other.

Find a list of all 11 diesel versions of Tata Sumo Gold. This table includes on-road price which covers all costs like RTO and Insurance.

Tata Sumo Gold, a SUV, is available from ₹ 5.26 - 8.93 Lakh in India. Tata offers the latest Sumo Gold in 11 versions in India. The base model SA Gold starts at ₹ 5.26 Lakh in Delhi and the top model GX BS-IV priced at ₹ 8.93 Lakh in Delhi. If you are looking for 10 seater car then you should consider Sumo Gold.