The YZF R-25 from the Japanese bike-maker Yamaha has been the talk of the town in recent times. The much awaited wait seems to nearing an end with the bike being launched in the Indonesian market recently. A while ago Yamaha had put up a teaser video on their website with a countdown timer being displayed. The video did not provide with detailed information on technical specifications or pricing, but the video was helpful in providing with a good insight as to what is on the cards from the Japanese bike-maker.

The Indonesian launched version of Yamaha YZF R-25 is stated to be powered by 250cc, liquid-cooled, in-line, four-stroke, two-cylinder engine. The eight-valve DOHC engine is mated to a six speed gearbox that generates a maximum power output of about 35.5bhp with a peak torque output of about 22.1 Nm. Dimension of the bike has not undergone major changes except for the designing cues that seem to have been borrowed from its elder sibling R6S. 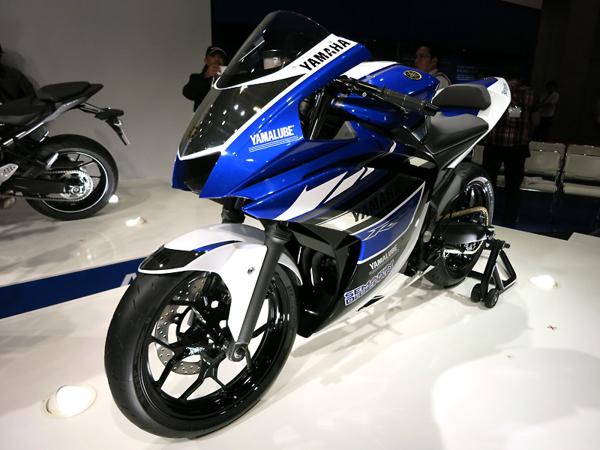 The R25 from Yamaha has received sporty dual headlamps with a smartly positioned air duct in the middle. The rear sports tapered design that is loaded with LED stoplights. The intelligent speedometer reads out vital piece of information like - gear position mention, oil change indicator, shift timing indicator light, fuel consumption indicator, engine temperature warning, FI diagnostic and a timer, along with the regular odometer and trip-meter feature.

Good and safe ride quality is ensured with disc brakes for the front and rear wheel. The front wheel gets telescopic fork, whereas the rear wheel gets a monoshock suspension. Two layer coating - electrode position coating for the base and wrapped top layer has been used for diamond type chassis. In recent time, the bike has been spotted undergoing road tests in India and it is believed to be launched sometime soon here too. The Yamaha YZF R-25 is launched for about Rs. 2.71 lakh in Indonesia, whereas the pricing for the Indian version is unknown for now and shall be known post it launch in the country.

Ford launches 'Figo - What a deal' scheme in Nepal