Both the vehicles Mercedes-Benz A-Class and the Volvo V40 are large luxury hatchbacks that would be launched in the country this year. While the A-Class would be coming to Indian shores on May 30 this month, no official word has been let out on the V40's launch. However, sources have suggested that the V40 could enter Indian market sometime during this year's June to July period. From the outside, while the Volvo V40 Cross Country seems like a mix of a car and a Sports Utility Vehicle (SUV), the Mercedes-Benz A-Class looks like a hatchback with sedan-like dimensions. 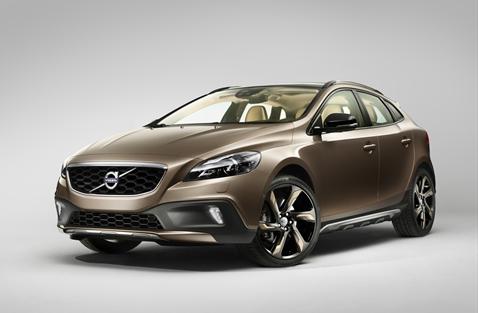 On the engine front, Swedish auto maker Volvo would be getting two motors of the V40 to India, one of which would be a T4 petrol and the other will be a 2.0 litre diesel power-mill. While the 1.6 litre T4 would generate a peak power output of 180 bhp, the 5-cylinder D3 oil burner produces 148 bhp of power. What is great about the D3 diesel is that gives a really quick response, allowing the vehicle to race off the blocks as soon as the accelerator pedal is pressed. No turbo lag is experienced in this vehicle and its mid range power goes on for a long time. Performance figures are testament to the responsiveness of this modern diesel engine- 0 to 100 kmph comes in 8.6 seconds and the 150 kmph mark is breached in 19.9 seconds.

The Mercedes-Benz A-Class has multiple engine variants and it is not certain which of these would make to India. Diesel versions include the A180 CDI, A 200 CDI and A 220 CDI, while petrol versions include A 180, A 200 and A 250. In India, this vehicle will be slotted below the Mercedes B-Class Sports Tourer. The A 180 CDI gets a 1.5 litre diesel motor capable of generating 108 bhp of power and 260 Nm of torque. The mileage of this vehicle is pretty high, at 26.35 kmpl. India is likely to get the A 180 petrol and the A180 CDI diesel models.

In terms of handling, the A 180 CDI is slightly better than the Volvo V40 Cross Country, as it has a soft suspension set-up. On the other hand, the V40 crossover is very stable even at high speeds of 150 kmph and above. There is only a slight amount of body roll experienced by the V40, when cornered at very high speeds. In other words, the grip and the composure experienced in the A-Class is better than the V40.

On the outside, the V40 Cross Country comes with a modish bonnet ‘V’, with the headlights at an angle, giving an ergonomic appearance. Plastic cladding, faux scuff plates at the front and rear, along with sleek roof rails give this vehicle an SUV-like appearance. In comparison, the A-Class looks radically styled, with diamond-shaped grille and headlamps with daytime-running LEDs. Interestingly, aggressive lines of design all round the vehicle look even better than the Hyundai Fluidic philosophy.

The Mercedes-Benz A-Class range has the characteristic circular AC vents with crosses in between. The 3-spoked steering wheel has mounted audio controls, with the Mercedes-Benz logo- 'Three Pointed Star' in the centre. Luxurious leather upholstery can be observed all round. It also comes with a GPS Navigation system and an integrated audio system. The V40 Cross Country has three different driving set-ups, which are Elegance, Eco and Performance, as per driving mood. LEDs placed in the interior can also be used for setting the cabin's ambience during the night.

Overall, there is not much to really choose between the two luxury hatchbacks, in terms of features. However, the A-Class, at a lower price, starting from Rs. 18 lakh onwards, could reign in more numbers than the Volvo V40 Cross Country, which should be priced above Rs. 25 lakh. The other factor in Mercedes' favour is that it is a better known brand as compared to Volvo, besides having a superior sales and service network in the country.