The much awaited Volvo XC40 will be launched in India tomorrow. Bookings for the smallest SUV from the company commenced in April for a token amount of Rs 5 lakhs. Volvo has allotted about 200 units of the X40 in the first lot for India. Although, the vehicle had been introduced internationally in 2017, it is due to be introduced in India tomorrow. 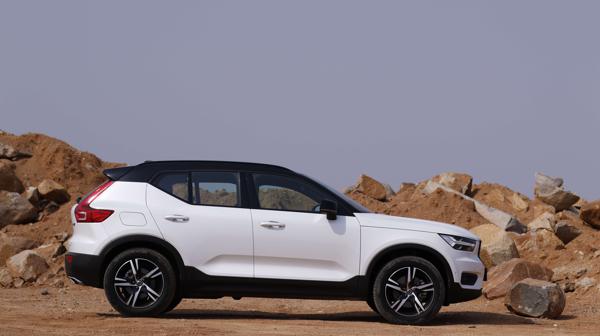 Under the hood, the Volvo XC40 will be powered by a 2.0-litre four-cylinder, in-line, twin turbo engine that generates 187bhp of power and 400Nm of torque. It is believed that the new model will be introduced in a single top-spec R-Design variant. The vehicle features premium black upholstery with contrasting door inserts. The vehicle further comes with leather stitching on the steering wheel and gear knob. Additionally, the small SUV gets a nine-inch touchscreen system with Android Auto and Apple CarPlay, along with a panoramic sunroof. Features like wireless phone charging, virtual instrument cluster and Harman Kardon sound system are offered as standard.

In terms of design, the XC40 features smoked headlamps, Thor Hammer LED DRLs, black ORVMs, dual-tone 18-inch alloy wheels and the traditional vertically stacked LED tail lamps. Moreover, the vehicle gets a blackened treatment for the grille and a black roof with blackened A-Pillars as standard.