In India, the Volkswagen Polo R Cup is held every year for inviting young motor sports enthusiasts. This year, a paid drive has been organised on the Buddh International Circuit in Greater Noida. Completing 5 laps in a Polo R Cup car (TDI diesel) would cost Rs. 20,000 and doing the same in Polo R Cup car (TSI petrol ) would be for Rs. 40,000. This fee will be inclusive of technical support, race track charges, race car fuel, and driver briefing. Over the weekend, Volkswagen Polo R Cup 2013 drivers would be meeting at Jaypee Greens for a pre-season test. Apart from this, Volkswagen Stuntillation has also been introduced to give new stunt drivers a platform to showcase their talents. 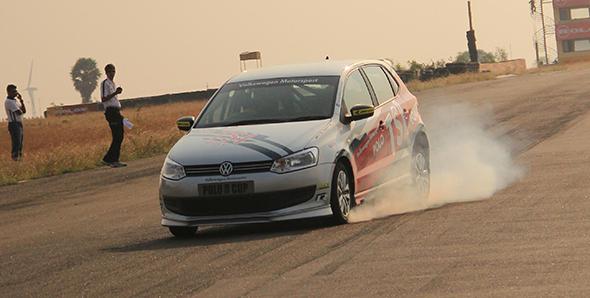 The German auto maker recently launched its new Polo GT power hatch with a TSI petrol engine this April, aiming to give buyers a dose of some serious power in a hatchback. At its price, the Polo 1.2 GT TSI is the most powerful hatchback in the country. It generates 104 bhp of power and 174 Nm of peak torque through a 1.2 litre petrol engine.

With this launch, Volkswagen India gives buyers a dose of something that is often found lacking in hatchbacks- serious power. Apart from the engine, the vehicle also gets a revolutionary new 7-speed DSG dual clutch gearbox, seen in a hatchback for the first time in the country. Not only does this vehicle accelerate from 0-100 kmph in just 9.8 seconds, it also delivers a great mileage of 17.2 kmpl.

In the Indian premium hatchback segment, Volkswagen Polo becomes a contender for the top position, with the introduction of this hot hatch, It will compete against the likes of Skoda Fabia 1.6 petrol, Tata Indica Vista D90, Fiat Punto 90 hp and Hyundai i20. Till now, the Maruti Suzuki Swift was the most pleasurable hatchback to drive in the country, but the new Polo seems to be capable of taking that crown away from the top Indian manufacturer.