We compare the two new products from the Volkswagen stable for India. Read on to find out more similarities and differences between the Passat sedan and Tiguan SUV in our sibling rivalry. 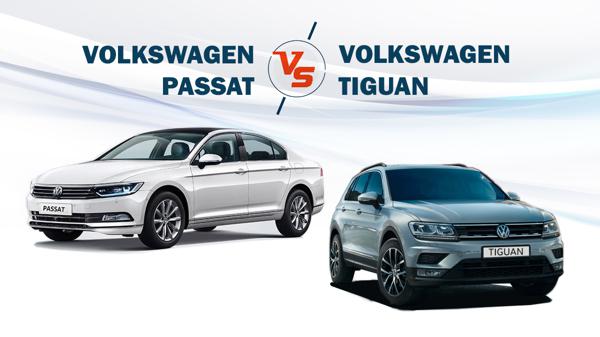 Volkswagen Group’s all-new MQB (Modularer Baukasten or modular matrix) platform is a versatile architecture. It can accommodate anything from small hatches to large SUVs. So the Volkswagen’s D-segment sedan shares its assembly line with the SUV crossover at the carmaker’s Aurangabad facility. The Passat initiated the new design philosophy in its eighth generation when it was introduced in 2015. The same design language has trickled down to the Tiguan and all the other Volkswagen cars. So you have the horizontal louvred grille flanked by subtle LED headlamps. The body creases are sharp and straight. The tail lights too are LED with a simple lighting signature.

Both these Volkswagens are available in just two trims – Comfortline and Highline. Both of them evenly matched in terms of the feature list, creature comforts and safety equipment. Inside the cabin you get three-zone climate control, leather upholstery, parking assist, ambient lighting, ISOFIX and cruise control as standard. The pair also gets hill hold function, ABS with EBD and traction control as standard fitment. The Passat boasts of nine airbags while the Tiguan makes do with six.

Under the hood is the same 2.0-litre four-cylinder turbocharged diesel engine albeit in different states of tune. In the Tiguan, the turbodiesel produces 141bhp and 340Nm, whereas, in the Passat, it churns out 174bhp and 350Nm. The transmission is the same seven-speed DSG automatic, but in the Tiguan, the power is sent to 4Motion all-wheel-drive system. Meanwhile, in the sedan, all the power is channelled to the front wheels. In terms of dimensions, the new Passat measures 4,767mm in length, 1,832mm width and has a height of 1,456mm. The sedan’s wheelbase measures 2,786mm. Being an SUV body style, the Tiguan measures a tad more in width at 1,839mm and stands taller at 1,633mm. However, with the added benefit of a boot, the Passat is longer by 262mm. Despite having different body styles, both cars ride on 16-inch alloy wheels as standard.

Although both these cars have a different body style, they both can accommodate four passengers in utmost comfort. They both are spacious, feature-laden and carry the characteristic Volkswagen quality. The prices are evenly matched as well. So if you want a high riding vehicle, which seems to be the trend these days, the Tiguan will serve as a subtle alternative to the other Germans in its class. Meanwhile, the Passat is the D-segment flagship sedan that could be your choice if you prefer to be chauffeured around more often. Jeep to begin deliveries for the Compass petrol automatic soon