Mumbai, 28th August 2009 – During his participation in SIAM Annual Convention 2009, Prof Dr Jochem Heizmann, Member of the Management Board, Volkswagen AG presented a positive outlook for the automotive industry in India in the coming years. Speaking as one of the panelists for the topic “REVIVAL – The Current & Future State of the Global Automotive Industry & Positioning of the Automotive Industry in India”, Prof. Heizmann said, he sees a growth especially for passenger car market. He also mentioned that the growth can further be enhanced through various government incentivised initiatives such as vehicle replacement program. 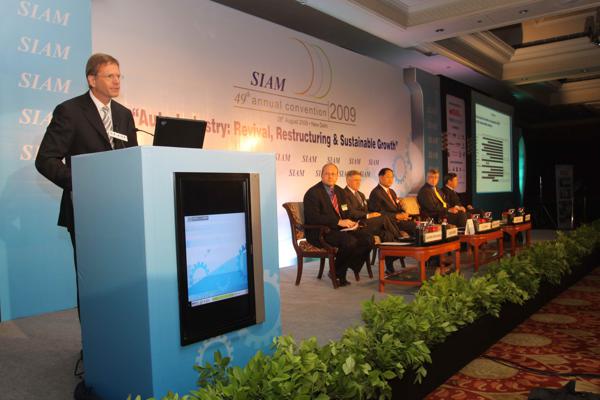 According to Prof Heizmann, year 2009 has seen a marginal growth and India is going to play a vital role to keep up the momentum and reviving the industry globally. During his presentation, Prof Heizmann also highlighted Volkswagen Group’s ambitious plans for the India market as the company is targeting capturing 8-10% of market share within the next four to six years. He also talked about the investments that Volkswagen has made through Skoda’s plant in Aurangabad and recently opened Volkswagen’s plant in Chakan, Pune.

The Chakan Plant will be producing the soon to be launched the 5th generation Polo in India. With an investment of 580 million Euro (i.e. around 38 billion rupees, or 3,800 crores INR), it has a capacity of producing 1, 10,000 cars /year.

Speaking on the occasion, Prof Heizmann said, “Volkswagen Group is present in India since 2001 when Skoda entered the market. Since then, we have launched 15 different models across Group brands, which is a unique success even compared with other manufacturers in India. This strategy has been successful, a clear sign of which is our positive year-on-year growth.”

Taking into consideration on Volkswagen’s focus on growth markets, India assumes an important position since the automobile market here will go from its present 1.1 million vehicles sold per year to 2 million vehicles in 2014.

Sharing his views on this, he said, “India is a huge market that we believe offers us potential. In India, the passenger vehicle segment has seen a growth despite the current market situation and Volkswagen plans to tap this. With the varied models across our brands as well as the establishments that have been set up we hope to be able to cater to our customers as well as dealers in the best possible manner.”

“Volkswagen is committed to the Indian market, the proof of which is the constant investment and growth that we provide through the various projects initiated. India is one of our key markets and we know that the future harbors a huge potential. One of our biggest commitments is the Polo that we plan to introduce soon.” he further added.

Every year, the Society of Automobile Manufacturers (SIAM) hosts an Annual Convention focusing on issues influencing the Indian automotive industry’s competitiveness and its integration with the global economy. The theme of this year’s Annual Convention was “Auto Industry: Revival, Restructuring & Sustainable Growth”. Prof Heizmann spoke at the plenary session which ended at a positive note focusing on “Revival”. At a time, when the world is facing a recession, he was able to integrate what policies in place would improve the situation as well as how India could see the way forward.

LPG on Bikes - Shiva Interviews the Inventor and answers questions