Toyota intends to bring diesel variants of its model Land Cruiser in India. It also intends to import its model Lexus in the country. The company is all set to increase its production to full capacity by July 2009. Toyota marks its presence in India as joint venture company, Toyota Kirloskar Motors.

TKM shall add two new models in its product portfolio – Land Cruiser LC200 in June 2009 and SUV Fortuner in September 2009. Land Cruiser will be imported as completely built unit which may escalate its price due to heavy duty structure. The diesel model will be Powered by a 4 litre, V8 diesel engine which pumps out 286PS of peak power at 3600rpm and a massive 650Nm of torque at 1600rpm. It will also feature a 6-speed automatic transmission and 4WD (four wheel drive). Land Cruiser is expected to be priced around Rs. 80 lakh and will be pitted against Audi Q7, BMW X5 and Mercedes M-Class models in its segment. 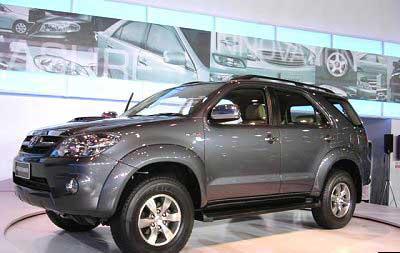 Fortuner will be imported as completely knocked down unit and will be assembled in India which may lend an option to the company to place the model competitively in the market. Toyota also intends to import Lexus cars to India. The company confirmed its plans to import fully built Lexus cars but has not given a definite date of launch, neither did it confirm which Lexus models will be available in India.