SpongeBob Square Pants comes out of his sea bed home and finds a new spot atop Toyota Sienna Minivan. This time around Toyota has teamed up with Nickelodeon to have the SpongeBob character on the minivan's windscreen. The move shall also benefit Nickelodeon as it gives them an opportunity to promote their upcoming 2D animated movie named, “ The SpongeBob Movie: Sponge Out of Water.” Post unveiling at 2014 Los Angeles Auto Show, the van shall also be used for a promotional tour of the movie. 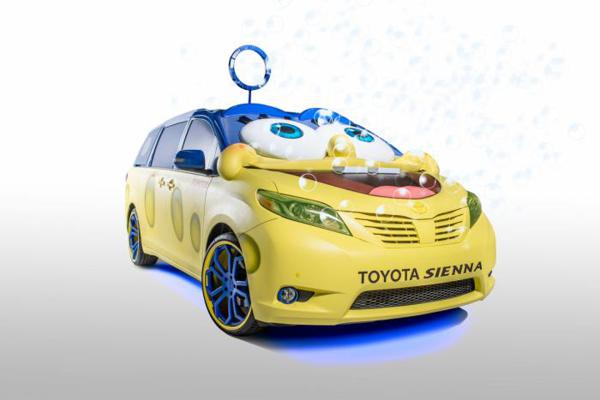 The Toyota's SpongeBob Sienna carries a distinctive blue and yelow exterior that features the animated character SpongeBob's face on the windshield. The concept vehicle is also capable of blowing real bubbles from its 'Superhero Incredibubble' mask. Speaking more on the occasion, Jack Hollis, Toyota Vice President of Marketing, said “Toyota is again teaming up with SpongeBob to help him and his friends go places in a custom ride inspired by their upcoming dry land adventures. The 2015 Sienna is a perfect choice for families and superheroes alike – offering seating for up to eight and a bubble blower attachment feature to boot.”

The cabin has also received a dash of wacky concept with a nautical-inspired steering wheel and multi-colored seats. Moreover, the floor has received a sand-inspired theme and the ceiling features a blue sky headliner. The popular wide eyed character has a charm of its own and manages to catch fancy every time you look at it.