The inaugural Etios Motor Racing (EMR) Trophy has been officially announced by Toyota Kirloskar Motor, which is to be held in Chennai. It is going to be a part of the FMSCI National Racing Championship, which will be organised by Madras Motor Sports Club (MMSC). It must be noted that Toyota has been involved in similar concepts in the past as well. Last year, the auto maker launched one-make racing concept at the Auto Expo, which was followed by several activities across the nation, including two exhibition races that were held in Chennai and Gurgaon. 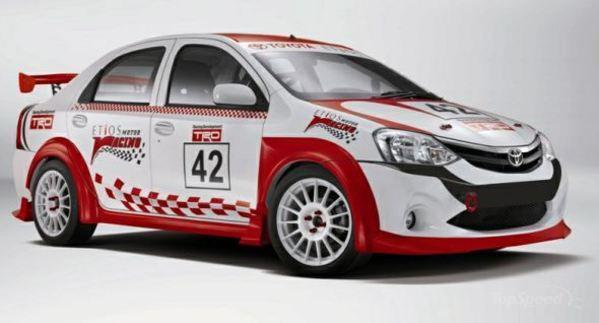 On 27th July, the first EMR race is due to be flagged off at the Madras Motor Race Track. The third leg of the National Racing Championship, being held in Chennai on 27th - 28th July, will see four EMR Trophy races. For the winners of all four races, there are trophies and cash prizes on offer. Except for the top three finishers of all races, an award and a cash prize shall be presented to the most promising young driver. The fifth leg of the National Racing Championship will be held in September at the Buddh International Circuit in Greater Noida. This event also includes a racing weekend, which will see the participation of 25 young EMR drivers.

N Raja, Senior Vice President Marketing at Toyota Kirloskar Motor was excited about the participation of EMR in the National Racing Championship (NCR). He said, “2012 was an excitement filled year for EMR, right from its official launch at the Delhi Auto Expo to the two hugely successful exhibition races at Chennai and Gurgaon, and finally international exposure at the Colombo Night Race in December. EMR also saw a lot of excitement amongst the youth during the driver selection & training camps which were held in various cities. We also took EMR to all our dealerships across India to give our customers a taste of Toyota’s motorsport experience and it was very well received. As we begin our season in 2013, we look forward to a lot of thrill & excitement as our drivers are all geared to take on the National Racing Championship. It is an honor for us to be associated with National Racing Championship and we believe this will be an excellent opportunity for our line-up of drivers.”

25 EMR drivers, who were selected last year, will battle it out for the EMR Trophy, participating in a total of eight races. Adding to this, the top three EMR drivers following EMR Trophy I and II will get the opportunity to participate in the Vios Cup, a race conducted in Thailand by TRD.