Bollywood commenced its biggest off shore celebration by kick starting the 14th Videocon d2h IIFA weekend, which is a part of the IIFA awards, sponsored by Tata Motors. This weekend long event is going to be a star studded affair with several popular actors and actresses from Indian film industry in attendance. The Venetian Macao, official host of IIFA, is the destination for this extravaganza. A press conference was held prior to the start, which saw stars like Abhishek Bachchan and Shahid Kapoor making the declare. Other stars present at the press conference included Ayushmann Khurana of Vicky Donor fame, Parineeti Chopra, Arjun Kapoor and Jacqueline Fernandez. 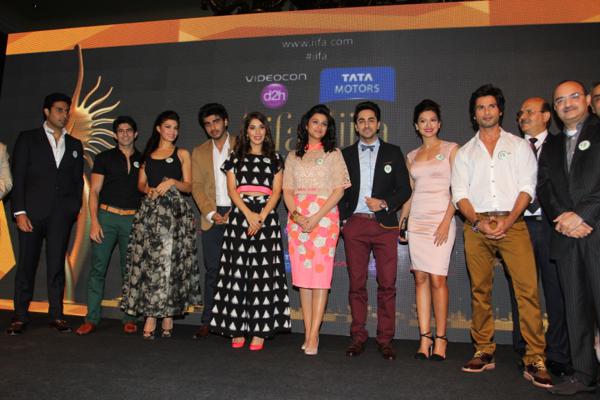 The Tata IIFA Awards, powered Lava Mobiles, will see a host of events that include film briefings, fashion shows and musical performances. Along with present and promising stars, this festival will also be attended by Indian dignitaries and Bollywood fans from all over the world.

Expressing his delight at the event, the Managing Director at Tata Motors Limited, Karl Slym was quoted as saying “We are delighted to partner with IIFA in their 14th edition – both Tata Motors and IIFA represent the global Indian making a mark on the world stage. We at Tata Motors are at HORIZONEXT now, passionately committed to anticipating our customers’ needs and providing the best vehicles and experiences that excite our customers globally – quite like the Indian film industry that’s coming of its own with the Indian diaspora as well as cinema-philes everywhere.”

The 2013 Tata Motors IIFA Awards will honour and recognise performances of actors, musicians, technicians and others, who were a part of the films released in the year 2012. Some of the categories for which nominees will be compete include Best Film, Best Director, Best Actor in a Leading Role, Best Actress in A Leading Role, Best Story and Best Music Direction. The IIFA Awards also recognise rising talents in the Indian film industry through awards like Male Debutant Star and Female Debutant Star.

IIFA is an association that aims at promoting Bollywood on a global level, transcending the boundaries of India. “With a common mission to showcase the best of Indian ingenuity across the world platform, the coming together of the two stalwarts reinforces the belief of creating a common ground for excellence. Videocon’s positioning as an industry leader is reinforced by this association with IIFA, which projects Videocon’s mission of continuity and change, on a global platform. By successfully synergising the brand’s strengths and dynamism to the core, this association is geared towards touching the heart of millions of consumers across the world,” said Mr. Arvind Bali, Director and CEO of Videocon Mobile Services.