The Swift DZire entry level sedan has been a hugely successful vehicle for Maruti Suzuki in the Indian auto market. On April 28, 2013, the company celebrated the fifth anniversary of its Swift DZire model by organising a ‘DZirable Mileage Rally’ in the city of Mumbai. The event saw enthusiastic participation from proud DZire customers, as over 62 of them participated in the same. A distance of 55 km was covered, whereby the rally was flagged off from an HP Petrol pump in Bandra and terminated at the Park Hotel at CBD Belapur. In total, this rally was held across 31 cities during the past weekend. 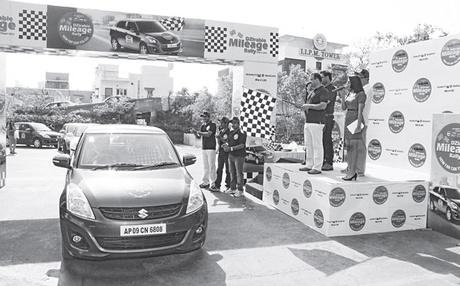 This is the second event that has been held by Maruti Suzuki, to mark the fifth anniversary of ITS Swift DZire range. A cumulative sales of 5.5 lakh units has been recorded for this vehicle by the company. Maruti Suzuki also introduced limited edition version called as Swift DZire Regal in the domestic market, in order to commemorate five years of its existence. The DZirable Mileage Rally celebrations were held over the weekend (April 27-28, 2013) in 31 cities across the country.

Expressing his happiness at the occasion of the DZirable Mileage Rally, Manohar Bhat, Vice President (VP) of Marketing at Maruti Suzuki India Limited, said, “The DZirable Mileage Rally is an innovative way to thank the old, new and prospective Maruti Suzuki Swift DZire customers. Over 5 lakh customers in just 5 years is a milestone that every automobile manufacturer dreams of and our customers have helped Swift DZire to achieve it. The sales numbers reflect the strong customer connect of the Swift DZire for its high fuel efficiency, low cost of ownership and the overall value.”

For the event, participants were given time charts, route maps and booklets with tips to score maximum mileage. Before the start, Maruti engineers and technical teams also gave practical tips and tricks to increase the mileage of vehicles. These tips included a speed of below 50 kmph and driving in correct gears as per engine rpm, along with prevention of unnecessary acceleration and deceleration.

Gurdeep Singh won the top honours by clocking the best mileage of 45.8 kmpl in the diesel category. Similarly, Shrirang Chindarkar won in the petrol category with a figure of 42.1 kmpl from his vehicle.  Reportedly, the average fuel efficiency for petrol versions was 30.6 kmpl and 32.4 kmpl for diesel ones. As compared to this, ARAI-certified mileage for the Swift DZire petrol is 19.1 kmpl and 23.4 kmpl for the diesel versions.