The rise of compact Sports Utility Vehicle (SUV) segment has really captured the imagination of car makers operating in India. A trend started by the success of the Renault Duster has caught on to other automobile manufacturers, who are now planning to bring in their compact SUVs. The recently launched Ford EcoSport is an excellent example of the rising demand of such models, which provide the comfort of a sedan and performance of a utility vehicle. Car makers are also establishing production facilities in India to reduce the cost and thereby, make the vehicle more affordable for price sensitive Indian buyers. Other examples of upcoming cars include the Nissan Terrano and the Volkswagen Taigun in compact SUV segment of the Indian market. 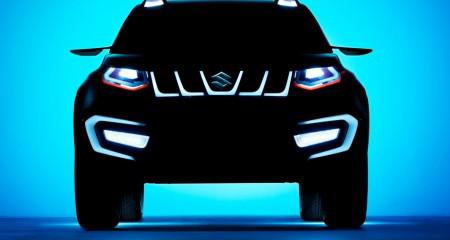 This competition has triggered Japanese auto makers to plan the launch of their own compact SUV. A new vehicle from Suzuki Motor Corporation is slated to be unveiled as a Concept Compact SUV at the 2013 Frankfurt Motor Show, which will be scheduled in September 2013. Industry experts feel that it would not be long before this car hits the Indian roads, given the kind of success other competitors have achieved. The compact SUV from Suzuki Motor Corporation is expected to named the Suzuki iV-4. Sketches of the Suzuki iV-4 were released recently, giving enthusiasts an insight into what the car might look like.

Currently named the Suzuki iV-4, this compact SUV is based on a concept named 'Grab Your Field'. Although industry experts have not been able to comprehend the exact meaning of this concept, but it is believed that this car is likely to embody the basic ruggedness of an SUV. In India, the Japanese company is expected to launch this car under the banner of Maruti Suzuki, which is the most trusted and popular name in the country. However, no official information has come from the auto maker, but there are strong chances of the car being introduced by 2014.

On analysing the revealed sketches, it is being said that the Suzuki iV-4 seems quite like the XA Alpha Concept, which was unveiled for the first time at 2012 Auto Expo held in New Delhi. The 2013 Frankfurt Motor Show, scheduled in September 2013, is going to be the venue for the company's press conference where it is expected to reveal details about the Suzuki iV-4. Apart from this, Suzuki Motors will display other models at the 2013 Frankfurt Motor Show, such as Alto, SX4, new SX4, Grand Vitara, Swift, Kizashi and Swift Sport.

Analysts believe that this move by Suzuki Motors is an encouraging sign for the Indian car market, which is currently enduring a low phase. Launches of new cars will help create buzz and subsequently, increase the demand. It is also believed that the success of compact SUVs can rub on to other segments and help the Indian car market to attain stability. Off late, the situation has been worsening due to the constant fall in the value of rupee against the strong US dollar and the consequent rise in prices, which has slowed down the demand. However, the success of cars like Ford EcoSport is a positive sign that the market hopes to develop on. According to claims made by the American auto maker, it received around 30000 bookings for the EcoSport in a space of 17 days, which many found surprising due to the prevalent market state.

Ford EcoSport has already made a name for itself and is providing stiff competition to the Renault Duster, Maruti Suzuki Ertiga and Mahindra Quanto. The Suzuki iV-4, when launched in India, will have to compete with Ford's much appreciated compact SUV, which is on a rise in India. On the other hand, the Suzuki iV-4 will fight the likes of Renault Captur and Peugeot 2008 in the European car market.