The much awaited biopic of the legendary athlete Milkha Singh, Bhaag Milkha Bhaag, hit theatre screens on the 12th of July. Starring Farhan Akhtar in the lead role, Bhaag Milkha Bhaag is directed by Rakeysh Omprakash Mehra, who is known for his cult status film, Rang De Basanti. The film opened to mix reviews from critics, who praised Akhtar's performance but said that it turned out to be too lengthy. However, the film has been widely appreciated by audiences worldwide and has done quite well at the box office on the opening weekend. The film has been watched by audiences from all over the world and it has struck a chord with Milkha Singh, whose life is being portrayed. Notably, Carl Lewis, former world-renowned athlete, called up Milkha Singh to congratulate him on the success of the film.. 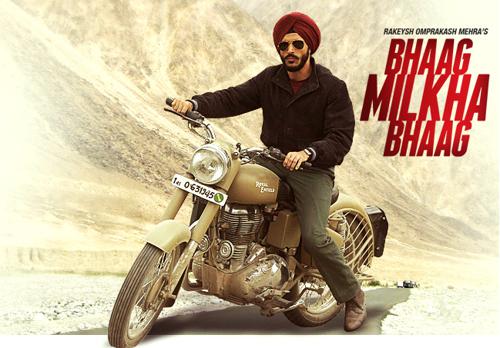 Farhan Akhtar, previously seen in hit films like Rock On and Zindagi Na Milegi Dobara, has received a lot of appreciation from fans on Twitter. This movie is another feather in the cap of Akhtar, who is also an actor, director, writer and singer. Farhan, himself, has been overwhelmed with the response of the film, thanking audiences through Twitter. In several interviews given by the star, he explained the rigorous regime he had to go through during the filming of this biopic. He also mentioned how he was inspired by Milkha Singh, the man who he was portraying in the film.

Bhaag Milkha Bhaag has a star cast that includes Sonam Kapoor, Pawan Malhotra and Prakash Raj. The film has a run time of around 200 minutes, one of the reasons why critics found it to be not as impacting. Rakeysh Mehra's biopic traces the events in the life of Milkha Singh, describing his journey to become one of India's most celebrated athletes. The film showcases some important incidents in Milkha Singh's life, including the 1960 Rome Olympic Games, his connection with Pakistan and the army life. Bhaag Milkha Bhaag has been liked by a lot of people from the Bollywood fraternity, such as Amitabh Bachchan, Shah Rukh Khan and Hrithik Roshan, among others.

Several brands have cashed in on the success of Bhaag Milkha Bhaag and have been employing new strategies to lure customers. Royal Enfield, one of the brands involved with the film, has introduced a contest for customers, giving them a chance to win the motorcycle ridden by Farhan Akhtar in the film. The company is asking viewers to describe an Odyssey, which has passion, hard work, struggle, obstacles and achievements similar to the life of Milkha Singh. This was to promote the 10th Royal Enfield Himalayan Odyssey, which took place from 22nd June to the 8th of July this year.

The Royal Enfield Desert Storm, shown in the film, is one of the most celebrated motorcycles of the iconic manufacturer. Priced at Rs. 1.28 lakh, the Royal Enfield Desert Storm has a single cylinder 4-stroke twin spark engine with a displacement of 500 cc. It generates an output of 27 bhp at 5250 rpm and a torque of up to 41.3 Nm at 4000 rpm. The styling of the Desert Storm is reminiscent of the times during the wars, when the companies motorcycles first rose to occasion and proved their mettle.