Royal Enfield, the well-appreciated cruiser bike manufacturer, is mulling over the possibility of introducing a 250 cc motorcycle in the Indian two-wheeler market. Currently the company is facing stiff competition from the likes of Japanese bike makers, such as Honda, Suzuki and Yamaha in the 250 cc segment. 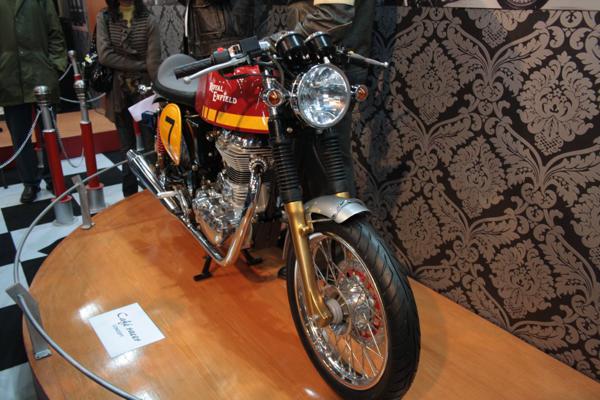 The upcoming Royal Enfield 250 cc motorcycle is anticipated to take the entire competition by storm and challenge the likes of Bajaj Avenger 220 DTS-i and Honda CBR250R in the country. Industry experts believe that the model could certainly help the company in tapping sales in sub-250 cc bike segment of the Indian two-wheeler market.

As per sources, Royal Enfield is working towards the launch of its Cafe Racer bike, for a launch in the latter half of 2013 calendar year. The Royal Enfield Cafe Racer derives its power from a 535 cc UCE power-mill, which is expected to generate superior power and torque outputs than the Classic and the Thunderbird models. The 535 cc Cafe Racer motorcycle engine will come trimmed with a new exhaust system, bigger injectors and high end cam shafts. The company has claimed that its Cafe Racer model is going to be the lightest and fastest Royal Enfield bikes in history.

Further, the yet-to-be launched Royal Enfield Cafe Racer bike will be built on a new frame sitting on a refurbished suspension mechanism. The much awaited model is expected to carry a retail price tag close to Rs. 2 lakh in the Indian two-wheeler market. At present, Royal Enfield has no model in its fleet with an engine smaller than 350 cc displacement, which makes it really interesting to see if the bike maker stuns the market with a 250 cc model in future.