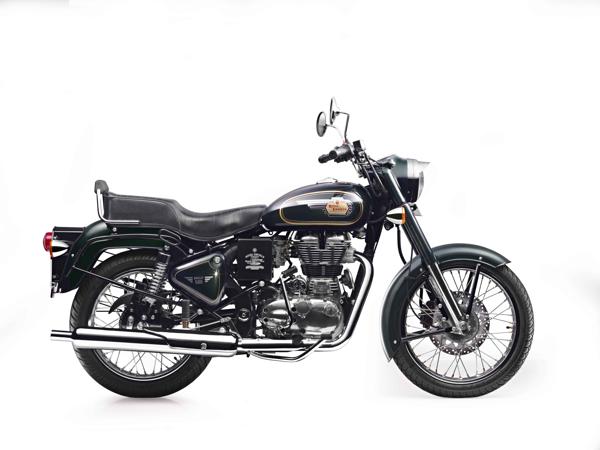 Royal Enfield Bullet 500 comes equipped with many noteworthy additions, such as MRF Zapper front tyres, new pillion grab rail, one touch electric starter and a classic tail lamp assembly. The MRF Zapper tyres would ensure superior stability and grip on unfavourable roads, while the one touch start comes across as a nice addition as well. The pillion grab rail is stylish and comes with nice cushioning at the end. Further, the adorable Royal Enfield Winged badge in stunning gold and silver dual tone design scores big points in terms of overall style statement for the new Bullet 500 motorcycle.

The headlamps are aesthetically pleasing and feature Signature twin pilot lamps, or the ‘Tiger Eye Lamps’, which complete the bike’s traditional Bullet looks. Further, a powerful halogen bulb has been incorporated in the headlamps, for providing ample illumination. Coming to the engine specifications of new Royal Enfield 500, the stylish bike is powered with a 499 cc, Unit Construction Engine (UCE). This 499 cc UCE power plant churns out a decent peak power output of 26.1 bhp, along with an equally impressive torque delivery of 40.9 Nm.

Speaking on the new Bullet 500 bike, Shaji Koshy, Senior Vice President (VP), Sales and Marketing, Royal Enfield India, was quoted as saying, “The Royal Enfield Bullet is the oldest motorcycle in continuous production with a fiercely loyal customer base across the world. The Bullet 500 is a much awaited model and while designing the bike for the Indian market we worked with the preferences of our special Bullet-loving audience here. Hence, the Bullet 500 comes with a 500 cc carburetted UCE, a powerful torque that offers better and very accessible power, along with several other enhancements such as front disc brakes, electric start and gas filled shock absorbers. In addition, for the first time ever, along with the signature black colour, the new Bullet 500 will also be available in the Forest Green colour.”

Royal Enfield has decided to launch its new Bullet 500 motorcycle across the Indian Territory in a phase wise manner. As per reports, the bike would be introduced in Punjab, Haryana, Chandigarh, Delhi-NCR and Kerala, during the initial launch phase. These regions have been identified as the best markets for its products by Royal Enfield.