Zen and the art of motorcycle journeys…

In its 6th year running, the annual tradition of the Himalayan Odyssey has come to be accepted as a ritual of adventure motorcycling. A character defining experience. A rite of reverence. An exalting pilgrimage to the Mecca of endurance Motorcycling: the Himalayas. 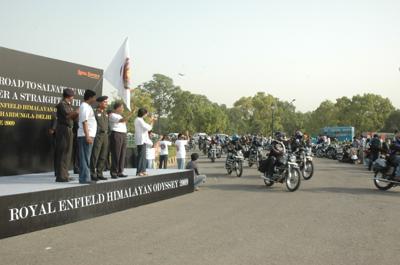 It is this trek from Delhi to Khardung-La and back to Delhi that 60 Royal Enfield Bulleteers undertake every year. The biker selection drill ensures that those selected for the Himalayan Odyssey understand the perils of rough weather, rugged terrain laden with gravels, and off-balance boulders. Conscientisation of the environment and awareness that health and safety comes before all else, make these able-bodied men ride-on together, dotting every halt on their route with a swig of winsome camaraderie.

Continuous medical help en route as well as the availability of specialized quick-repair mechanics, ensure that the Himalayan Odyssey contingent of men and machine are fighting fit at all times. The tribute to the Himalayas thus gets rounded off in 15 days. The sense of a pilgrimage begins from Delhi itself where the Buddhist ceremony of blessing the bikers to dispel obstacles in their path – the Barche Lamsel - precedes the flag-off.

Shaji Koshy, Head, Sales & Marketing, Royal Enfield said, “In the month of June, the true pleasure of riding takes over Royal Enfield completely. As a motorcycling company we feel it is our moral responsibility and as a cult brand, our role in society is to not only promote safe riding but also leisure motorcycling. Starting this year we will be increasing the number of rides at each of our dealerships across the country. Within this year we will also be launching the Nepal Odyssey, the Southern Odyssey and the Rajasthan Odyssey. Team trips within different geographies so that more people can get hooked on to riding and start promoting this very spirit of motorcycling.”

The Chief Guest at the ceremonial flag-off, Major General R.K. Sanan, Commander, Technical Group, EME, said, “Having met the bikers and interacted with them, I sense the dedication that has gone into preparing for the Himalayan Odyssey. From the many examples that I have seen here, one quickly realizes the extent to which our youth are engaged in the sport of motorcycling.

In this ride of endurance testing, Khardung-La is not just the highest motorable road, it is a metaphor for altitude. And, it is in scaling this altitude that each of you can gain a sense of your own fortitude.

The Olympic oath extols each sportsman to be swifter, higher and stronger. This is the oath that we should take as we walk our paths in life. Citius, Altius, Fortius is not only about being swifter, higher or stronger, but it has within its fold the simple dictum of living, ‘Win or lose, be a sport.’

So follow your heart for there is no greater service of significance and as John Bunyan so famously proclaimed in his poem, A Pilgrim’s Progress, ‘How shall we escape if we neglect so great a salvation.’”