Offering much to the delight of luxury car fans, the Indian wing of Rolls-Royce has launched its Wraith model in the Indian auto market. Rolls-Royce latest offering Wraith is dubbed as most powerful and advanced car that the company has ever made and was first showcased in the 2013 Geneva Motor Show. It must be noted that the Indian car market is among the selected countries where Wraith is being launched. Interestingly, Wraith is currently the only coupe to feature in the inventory of Rolls-Royce. 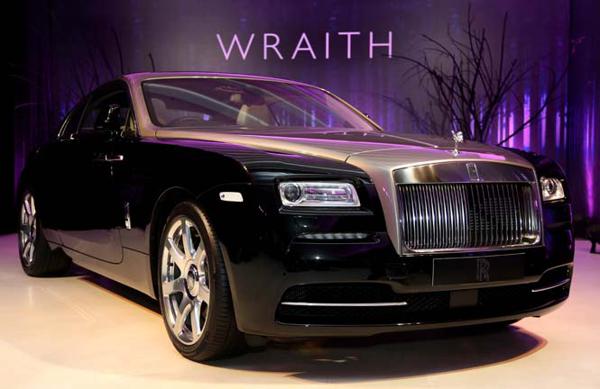 Expressing his delight on the launch ceremony, the General Manager for Emerging Markets - Asia, Rolls-Royce Motor Cars, Herfried Hasenoehrl was quoted as saying, “Today we are proud to reveal the most dynamic and powerful Rolls -Royce ever built. Rolls-Royce has enjoyed a great and lengthy history in India, and we’re happy to greet our customers here with this exceptional new model. Wraith offers luxury, performance and refinement. All with the Rolls-Royce quality and craftsmanship expected of its pinnacle cars.”

The car is powered by the 6.6-litre twin-turbo charged V12 engine that produces a peak output of 624 bhp while attaining a maximum torque of 800 Nm. As per the official specifications released by the company, the mighty engine of Wraith can reach 100 kmph from initial in just 4.6 seconds. The company's claim of Wraith being the most powerful Rolls-Royce ever built is evident from the fact that the car weighs around 2 and a half tonnes and still accelerates at a high speed. The car will be equipped with a 8-speed automatic transmission system, which will transfer the power to all its wheels.

Yadur Kapur, Director of Rolls-Royce Motor Cars New Delhi, said, “Wraith represents a magnificent milestone for Rolls-Royce Motor Cars, coinciding with the celebration of our New Delhi dealership’s fifth anniversary of operations. I am delighted to be able to commemorate our progress with Wraith – the most dramatic, stylish four-seater Coupé to drive India’s roads. I foresee Wraith appealing to a new segment of Indian customers who value driving in style and comfort but want effortless performance.”

Rolls-Royce Wraith is priced at Rs. 4.60 crore (ex-showroom Delhi), which can further go up if one wishes to splurge money on customising the car based on their own preferences.

It is presumed that Rolls-Royce will bring Wraith in India through the Completely Built Unit (CBU) route. It must be noted that this method is also followed by the company on its Phantom and Ghost models in India.

Wraith is available in two tone exterior colour options, where owners can choose their preferable options from a large colour palette. The car will be seen with smaller wheelbase as compared to the one given on Ghost. Its overall length and width of Wraith is also tweaked on comparing it with Ghost. The size and design of the car resembles more of a coupe shaped structure with the lack of B-pillar. Wraith will offer competition to its nearest rival Bentley's Continental GT. Although, the difference in price is significant but with both of them sharing the same design, it is evident that the competition will be head on.

As claimed by the company the interiors of the car are provided with Phantom grade leather along with the traditional rich wood panelling, which is seen in almost all of Rolls-Royce cars. The main highlight of Wraith has been the new head-liner roof, which illuminates an effect of gazing night stars. Apart from it, the car will be seen equipped with premium features like drive mode selector in which the car automatically adjusts its suspension and gear ratios by scanning the road ahead.

In the meanwhile, Rolls-Royce also told about its future plans in India saying that the company intends to open 5 dealerships in India by the end of current financial year. The company also said it will undergo a 3 month tour of India spanning across various metropolitan cities in order promote its latest model.

Maruti Suzuki Stingray to co-exist with the existing WagonR