Indian luxury car customers are in for delight. The company is planning to launch a new E-class model in India by end of September this year. It will be the ninth generation E-class model W1212 based on the popular twin-eyes theme. The car is expected to be powered by 3.5 liter 24valve V6 direct injection gas engine delivering 292 bhp power. The diesel model will be available only by the end of the year or later and it will have a 320CDi engine.

The car will sport a mini S class look with striking square head-lamps that are characteristic of its earlier W1210 model. It also comes with 7-Gtronic automatic transmission with paddle shifters. 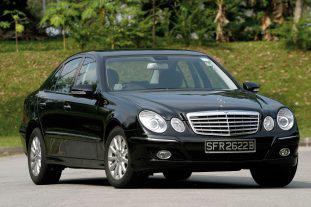 Mercedes had already launched a new M-class earlier this year in March. The new M-class is available with two engine choices - the ML 320 CDI (diesel engine) and the ML 350 (petrol engine) and priced at Rs. 52.77 lakh or higher. The price and more technical specifications of the upcoming E-class model still remain unclear and will be available only upon the launch.

Mercedes is actively working on regaining its numero uno position in the market as the highest number of luxury car seller in the Indian market. Current sales figures of BMW cars had made Mercedes to slip to the second position. The new E-class is expected to boost the sales figures which have been experiencing flat sales growth since past few months.

Photos of the New E-class are not yet available and will be shared at the earliest.

Hybrid From Porsche in India