Mercedes-Benz, the German luxury automotive marque, has revealed new editions of its C-Class vehicles, wherein saloon, estate and coupe versions of the same would be manufactured. Interior material is expected to be more comfortable and luxurious, while the exterior design would appear classier than earlier versions. In addition, a new model known as C 220 CDI 4MATIC has been announced. 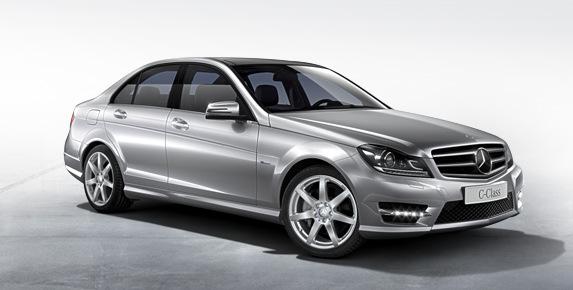 The Mercedes-Benz C 220 CDI 4MATIC gets a 2.2 litre diesel power-mill that produces peak power of 169 bhp, along with a maximum torque of 400 Nm. The car would have an All Wheel Drive (AWD) system, which will allow it to provide a superior ride on all types of terrain. Features such as COMAND online, Live traffic information system and control handling are available in the C220, while Sport button would be exclusively available in this vehicle. The C 220 CDI 4MATIC can be purchased in both saloon and estate versions.

The new Mercedes-Benz edition C would definitely stand apart from the older versions in the areas of multimedia and telematic features. Changes from the outside include a high gloss front radiator grille and chrome trimmed darkened headlamps. C Coupe vehicles would have AMG body styling on front and rear aprons and side sill panels.

The stunning car comes with 17 inch high gloss black paint finish on five-spoke alloy wheels, present at the front and back. Tyres of the type 225/45 R17 could come factory fitted on the saloon, estate and coupe variants. However, it is possible to use a different configuration of 245/40 R17 type at the rear in all three models.

From the inside, levels of sportiness and style have been elevated in all three models. Tremendous attention has been paid to details, such as sports seats made of Artico man made leather or Dinamica microfiber. In blue and alpaca grey aluminium trims, these seats are designed in dual tone combination. The three-spoke steering wheel is covered in luxurious Nappa leather and can be used for multiple functions. High-tech Comand online multimedia system with Live traffic information, along with real-time details of traffic jams. More infotainment features include a Media Interfacem Harmon Kardon Logic surround system and digital radio. Industry experts believe that new C Class models would help Mercedes-Benz India gain lost ground in the country.