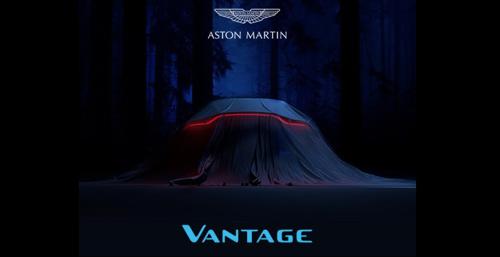 In the teaser image, the lip spoiler is flanked by the sleeker tail lights akin to the current generation Vanquish. The veil tries to hide the prominent rear diffusers which we know are done in gloss black with integrated exhaust tips. The new-gen V8 Vantage has already been showcased in its production body in few images released by the Gaydon-based carmaker couple of months back. And the car has been spotted testing by our spy sleuths on many occasions. We now know that the British sports car will resemble the DB10 Concept rather than the current flagship, the DB11, as was speculated earlier. A few leaked patent images of an Aston Martin from the Japanese patent office surfaced in July. The tail lights in those patent images also seem to be strikingly accurate with this new teaser.

The Vantage will sport the Aston Martin’s newly adopted grille (first seen in the Vulcan hypercar). It will be complement by some aggressive lip-splitters. The headlights are expected to be scrounged directly from the DB10. The fender on the Vantage will be similar to the DB11’s and is expected to make its way to all future Aston Martins.

As far as powertrain is concerned, the new Vantage will be the second vehicle to benefit from Aston Martin’s partnership with Mercedes-AMG, after the DB11 V8. The same 4.0-litre twin turbo V8 built by Mercedes-AMG for the AMG GT lineup will be reworked by Aston Martin. The power output will be around 500bhp, enough to send the Vantage whizzing from standstill to a 100kmph in around four seconds. Aston Martin is expected to offer the new Vantage with a choice of either a six-speed manual or a dual-clutch automatic transmission.