Here are some of the spy images of the new Bentley model coming up in the UK market in 2010. The new Bentley is expected to be called the “Grand Bentley.” These images were leaked from company Crewe headquarters this summer where the car is currently under production. It is being manufactured under the code name Project Kimberley. It will be the successor to the Arnage limousine model. 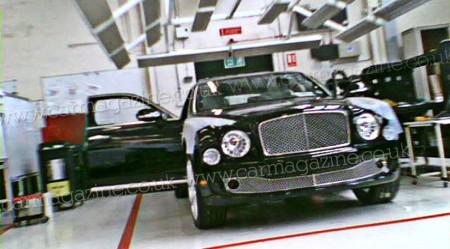 The new Grand Bentley will be a massive car powered by huge 8L V8 engine. It will rival the new Rolls-Royce Ghost, which means it should be between $1 million and $1.2 million. The all-new Bentley will be revealed - and named - in August at the Pebble Beach Concours D’Elegance in Monterey, California this year and will debut in the markets early next year.

With a unique fusion of elegant design, hand craftsmanship and technological innovation, the new model embodies the potent yet luxuriously refined driving experience that is ‘pure Bentley’.