Audi India, the domestic division of German premium car maker, is planning to entice the auto aficionados with the launch of 2013 Audi RS5 in the country. As per the Audi India’s Facebook page, the model is expected to sparkle on the domestic roads very soon. Sources close to the development of the new model stated that the 2013 RS5 has been based on the A5 platform, but is slightly wider and has low ground clearance than the standard A5. Interestingly, the sports variant of upcoming Audi RS5 was first showcased at the 2012 Geneva Motor Show. 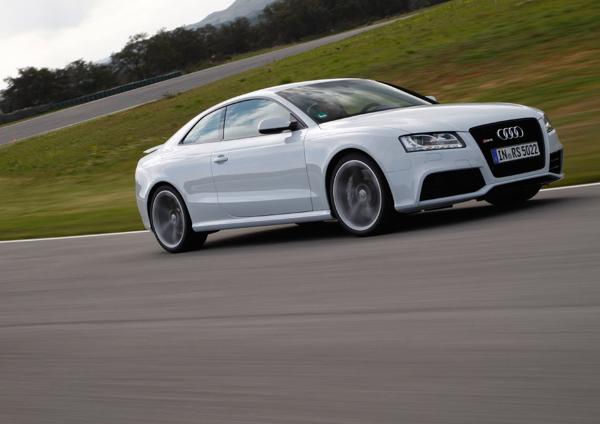 With the launch of a new model, the German auto maker is planning to replace the current generation RS5, which has been offered to Indian buyers from 2011. Interestingly, the upcoming model will be equipped with the same naturally aspirated, direct-injected all-aluminium engine, which has been doing a good job in the current generation model. With a maximum power output of 453 bhp and peak torque of 430 Nm, the RS5 has been the first choice for a number of auto enthusiasts.

The new RS5 is also expected to share the same Quattro all-wheel drive system, which has been offered within the current generation model. Unlike the standard Quattro setup, the RS5 will be equipped with a new rear sport differential, replacing the standard one. Also, the engine driven hydraulic assist has been replaced by the new Electric Power-Steering (EPS) set up. Aimed at enhancing driving dynamics, the dampers have been upgraded and quick throttle response has been improved. The lowered ride height facilitates the reduction of body oil.

Along with the enhanced functioning of the model, the aesthetics have also been paid a lot of attention to give it a unique sporting appeal. The RS5 has an exclusive retractable rear spoiler and a blacked-out trapezoidal grille. Carbon-fibre intake manifold and red cam covers give a distinguished look to the RS5. Buyers can also opt for piano black trim, sport exhaust system with black finishers and 20-inch graphite-coloured wheels.

Mercedes-Benz India to come up with traffic alert system