Tata Motors intends to launch the diesel models of its ultra-cheap car next year. It is already launching the petrol model on March 23 this year. "We are part-suppliers for the diesel version and have been asked to start supplying to the Tatas in six months," a vendor reported to an English daily newspaper. It may be the cheapest diesel model in the automobile history which is expected to be priced around Rs. 2 lakh. Currently, Tata Indi-Cab priced at Rs. 3.3 lakh is the cheapest diesel model. 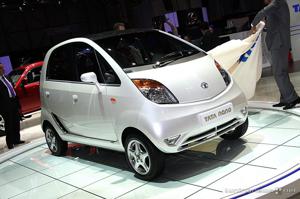 Currently the company is producing the petrol variants at its Pantnagar factory in Uttrakhand and will produce only 3000 models. The full production of the model will commence next year when the mother plant in Sanand, Gujarat becomes fully operational.

Tata Motors also presented the jazzed up version Nano Europa at the Geneva Motors Show. The global models is powered by three-cylinder petrol engine as against the two-cylinder engine in the Indian Nano. Power steering is standard, too in this model. The car will also feature ABS, driver and passenger side airbags and an electronic stability package when it’s launched in Europe in 2011. The interior of the car (only right-hand drive cars at the show) is done in such a way that most components are the same for the left-hand drive application. The car, according to an executive present at the show, features a three-cylinder engine so that it can keep pace with expressway speeds.

Honda CRV and Accord in Diesel Versions

Will India have VW Beetle In India by October?