The Mitsubishi Attrage, a compact sedan, is set for its launch in the Thai car market. It is a sedan variant of the current generation Mirage, a front-wheel drive compact car from Mitsubishi. First unveiled at the 2013 Bangkok Auto Show held in March, the sedan is slated to be introduced in Thailand in July. Some sources say that the unique name for this sedan is an amalgamation of the name of its sibling, the Mirage, and the word attractive. However, the Attrage will be sold under the name Mitsubishi Mirage G4 for the Philippine auto market due to certain negative connotations it has in Filipino. 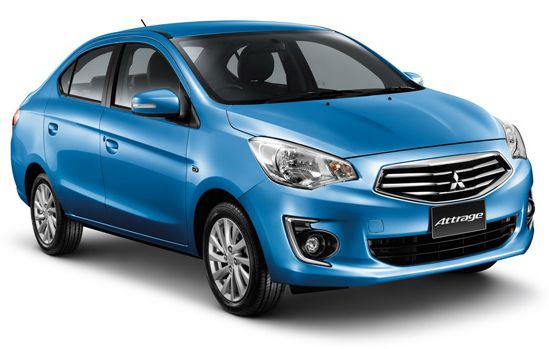 This sedan from the Japanese car maker is being manufactured at the Laem Chabang Industrial Estate, situated in Chonburi, a province in Thailand. Notably, the Mitsubishi Mirage is also being produced at the Laem Chabang Industrial Estate. The Attrage from Mitsubishi holds the status of an eco-car, which gives its makers several tax benefits. There are quite a few similarities between the Attrage and the Mirage, which seems almost obvious as the former is an extended version of the latter.

However, a closer look would help spot many differences that exist between the two. The design of Attrage comprises a triple-slatted chrome grille that houses the Mitsubishi badge, chiselled headlamps, wide and angular low intakes and fog lamps in claw-shaped housings. Mitsubishi Attrage provides passengers with more legroom at the back and has a longer wheelbase than the Mirage. The sedan has a weight range of 885-930 kg, which is due to the use of high tensile steel in the body.

On the inside, however, the Attrage shares the same engine with Mirage, which is a three-cylinder 1.2-litre 3A92 MIVEC unit capable of producing torque of up to 100 Nm. There are two options in the Attrage in terms of transmission, namely 5 speed manual and INVECS-III CVT. Mitsubishi Attrage will be available in GLX M/T, GLX CVT, GLS CVT and GLS Ltd CVT versions. Electric folding door mirrors, multi-information display, keyless entry and piano black interior trim are some of the standard features available across all variants.

Industry experts are trying to analyse the reason behind Mitsubishi having no plans of introducing the Attrage in the Indian car market. Several causes can be zeroed in on making a conclusive report on the reluctance of Mitsubishi. The Japanese car maker lacks a strong dealership network in the country, which will have a direct effect on its sales. Secondly, the compact sedan segment of the Indian auto market has some big and established names competing for the top spot, thereby making it difficult for Attrage to carve its own niche.