On 19th February 2013, Mercedes-Benz India Limited (MBIL) launched the new G63 AMG, which happens to be the successor of the previous G55 AMG model. The new vehicle features an interesting design and has been equipped with an engine, which is 44 bhp more powerful than the G55 AMG. The G-Wagen is the longest standing Sports Utility Vehicle (SUV) for the German luxury auto maker in the country. Interestingly, the G63 AMG would also be driven by Hollywood superstar Bruce Willis in his latest action movie 'A Good Day to Die Hard'. 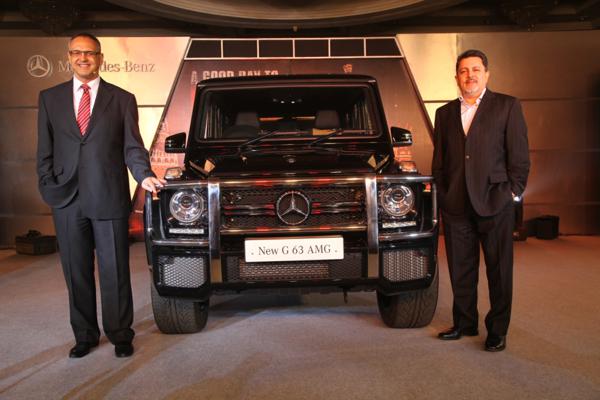 The launch of this vehicle is a rare coordinated effort with Fox Star Studios, producers of the latest 'Die Hard' film. Car chases that would also involve other Mercedes vehicles would be seen in the city of Moscow, during the film. Commenting on the association, Vijay Singh, CEO of Fox Star Studio India said, “We are extremely proud to present the latest and fifth edition of Die Hard series, 'A Good Day to Die Hard', to the fans across India. What makes this moment truly special is our in film association with an entire fleet of Mercedes-Benz. The audience experience is bound to reach a new height when they witness spectacular car chases and stunts, that keep the never say die spirit of Die Hard intact with a touch of class of Mercedes-Benz.” In addition to Bruce Willis, the movie also features Sebastien Koch and Jai Courtney. Reportedly, the film will be released on February 22 across the country in 5 different languages and will be a visual treat for action buffs.

Coming back to the model, the G63 AMG is powered by a monstrous supercharged 5.5 litre AMG engine, capable of generating maximum power of 544 bhp and a torque of 760 Nm. The SUV accelerates from initial to 100 kmph in a blistering 5.4 seconds. The engine can be started with an ECO Start/Stop function, which also increases the fuel efficiency of this model. From outside, the vehicle gets metallic paint and chromed twin louvers on the AMG radiator grille. Wheel arches look muscular, sporting a 'V8 BITURBO' logo. 20-inch tyres are fitted are fitted in the new model, which are complemented by the 5 twin-spoke light AMG alloys. 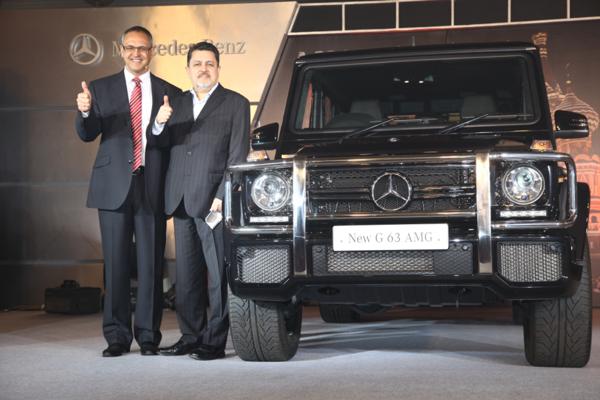 Mercedes-Benz pulls off the curtains from new G63 AMG in India.

The metallic look of new G63 AMG is completed with a standard-fit Exterior Stainless Steel package. Two dual chromed exhaust pipes can be seen beneath the rear door of the model. On the inside, one is greeted with interiors that are more luxurious than the outgoing G55 AMG. The seats, dashboard and door centre panels are covered in rich leather. Its stainless steel door panels look magnificent when illuminated. The G63 AMG gets a multi functional steering wheel with several mounted controls, giving it a hi-tech look. Additionally, lining at the roof has been covered with anthracite Alcantra and there are several ambient lighting options as well.

With respect to the launch, Eberhard Kern, Managing Director and CEO of MBIL said, “The G-Class has the essential attributes of a Mercedes-Benz: Dynamism, Comfort, Safety and Status. Yet its pedigree and classic form has been retained across the 34 years of its existence. The G-Class retains its shape, rugged design and the same mission to cope with extreme conditions. It’s not surprising therefore that the G-Class is called upon to serve in extreme terrains; its cult status makes it the vehicle of choice of world leaders and celebrities alike. The G 63 AMG reconciles an involving, compelling driving experience with performance, functionality and timeless appeal which is exceptional in this vehicle class. We are excited to introduce the G 63 AMG for the discerning Indian customers.” The latest G-Wagen can be purchased at a price of Rs. 1,45,77,000 (ex-showroom Mumbai).

Previously, the G55 AMG had been a vehicle of choice for many celebrities in India and across the world. It received good reviews and was quite successful in India. One hopes that the latest version of the G-Wagen would also be as successful as the previous one.