Recently, iconic German luxury car maker Mercedes-Benz launched its new B 180 CDI Style car at a price Rs. 22.60 lakh (ex-showroom Mumbai). At the event, the auto maker also introduced a Luxury Touring Trail Campaign with Bollywood stars Abhay Deol and Aditi Hydari Rao as its ambassadors. The winner of the contest will be awarded an opportunity to go on an exotic tour with actors Abhay Deol and Aditi Rao. Apart from this, the lucky winner will also get a chance of driving the recently launched car for an year. 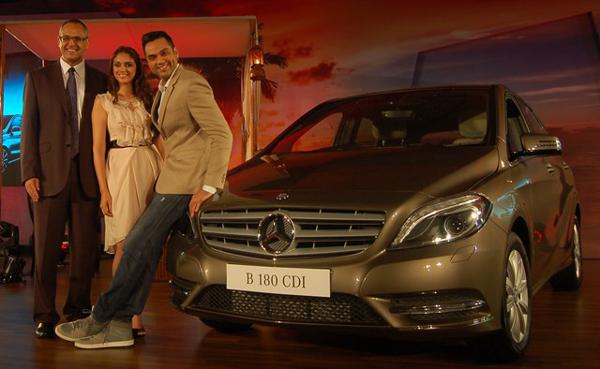 In the Luxury Trial Campaign, participants have to select their preferable location from a long list of destinations included in the offer. The list includes popular regions like Shimla, Kufri, Bejal, Udaipur, Gulmarg, Kovalam, Kumarakom, Goa and Coorg. In order to participate in the campaign, individuals need to test drive the new B 180 CDI car. Then they are required to upload their photos, alongside the new car and write few lines describing their chosen destination. Winners of the contest would be announced on the basis of a persons getting maximum votes for their descriptions, which they have written.

Commenting on the new promotional campaign, Manager Director and Chief Executive Officer of Mercedes-Benz India, Eberhard Kern was quoted as saying, “Mercedes-Benz India have a significant digital presence and we have been very closely connected with our young followers and brand enthusiasts on the web. Our unique and exciting digital campaigns and contests have met overwhelming response and have encouraged us to launch the Luxury Touring Trail campaign for the new B-Class CDI. The winners of this exciting contest will get a memorable experience of touring with Abhay Deol and Aditi Rao in an exotic touring destination in their favourite B-Class.”

This newly launched car is equipped with a performance oriented 2.2-litre engine, along with various advanced features like Anti-lock braking System (ABS), Electronic Stability Programme (ESP), climate control system, cruise control and COMAND system. The competitive pricing of this car, bundled with many technologies, makes it an attractive option for potential buyers. Industry experts are of a view that Mercedes-Benz India is hoping to attract customers by organising such events and collaborating with popular celebrities.