Externally, the GLC coupe follows the same design cues as the GLE coupe. It has a coupe-like body, which sits on large wheels and has high ground clearance. The face is defined by the avant-garde grille while the side profile is dominated by the heavily flared wheel arches. Moving to the rear, we can see an enlarged version of Mercedes-Benz’s tail lamps that it uses on all its coupe models. It is 4.73 metres long, 1.60 metres in height and has a wheelbase of 2.87 metres. 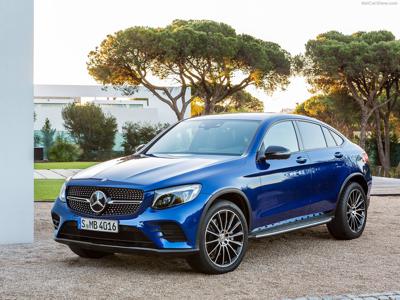 The cabin is typical Mercedes-Benz and has the same layout as that of the standard GLC crossover. Standard features in the cabin include multi-zone climate control, COMAND infotainment system with touchpad, leather upholstery and electrically adjustable everything.

It will be offered in eight variants including a hybrid version as well as top-of-the-line AMG spec model. The Coupe is powered by a four-cylinder petrol engine and a four-cylinder diesel engine with multiple outputs. The former is the GLC 250 4MATIC with an output of 211bhp. The diesels are available in two variants- GLC 220 d, GLC 250 d whose engine produces 170bhp and 204bhp respectively. The hybrid is the GLC 350 e which has a combined output of 320bhp while the top-spec GLC43 4MATIC gets a V6 twin-turbo mill that produces 367bhp.

Above all the features of the standard car, this also gets direct-steer and sports suspension. Optional extras include dynamic body controlor air body control.Mercedes-Benz is also offering an Edition 1 for the GLC Coupe which gets an AMG body kit, 20-inch alloy wheels, and special exterior paint job as well as twin-tone leather upholstery.

The car will come to India, probably by the end of this year but is likely to be offered only in the GLC43 AMG spec variant as is the case with the GLE Coupe.