German luxury car maker Mercedes-Benz is expected to launch the much-awaited diesel variant of the B-Class. Simultaneously, the auto maker plans to commence the assembling of the new B-Class at its facility in Chakan, which is located in Pune district in Maharashtra. Likely to be launched on 11th July 2013, the Mercedes-Benz B-Class diesel is going to be named B180 CDI. It will be equipped with a four-cylinder 2.2 litre engine, which is the same as the one fitted in the Mercedes-Benz A180 CDI. This engine is expected to churn out an output of 107 bhp at 3200 rpm along with a torque of up to 250 Nm. Based on the new Modular Front Architecture (MFA) concept from Mercedes-Benz, the power to the front wheels of the B-Class diesel will be transmitted from the 7-speed dual-clutch transmission gearbox. The Mercedes-Benz B-Class is expected to compete with the likes of BMW X1 and Volvo V40 Cross Country. 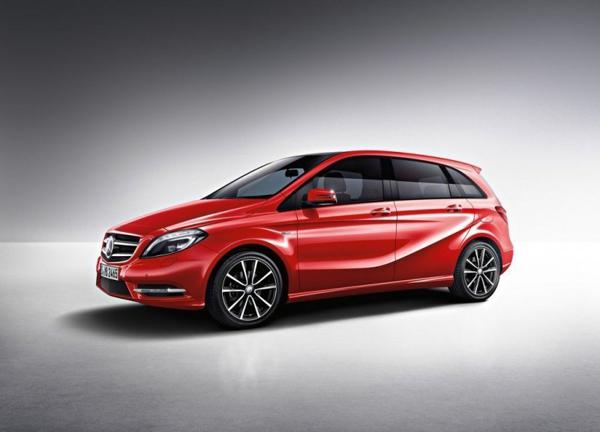 In the recent past, Mercedes-Benz has launched a number of vehicles to regain a strong ground it held in the Indian car market, which at present has been shaken a bit by Audi and BMW. However, with the upcoming launch of the Mercedes-Benz B-Class diesel, the German luxury car maker is adopting an aggressive policy to draw maximum buyers and strengthen its position.

The Volvo V40, one of fiercest competitors of the B-Class diesel, was launched on 14th June 2013 at a price of Rs. 28.5 lakh (ex showroom New Delhi). Known as the V40 Cross Country, this car has a superb design along with some amazing technology and security features. “Volvo V40 Cross Country, which is a variant of the V40, represents a model that is premium in design, features, technology and safety. The car will bring in new impetus to our growth strategy in India,” Thomas Ernberg, the Managing Director of Volvo Auto India was quoted saying at the launch.

Powered by a 2-litre 5-cylinder diesel engine, the V40 Cross Country, according to the manufacturer’s claims renders a mileage of over 16 kmpl. It is expected to give competitors a run for their money given its power, performance and fuel-efficiency. “The V40 Cross Country will attract the new generation of young upmarket luxury car buyers in India primarily because it offers high-end technology, driveability, safety and features parallel to none in this price bracket,” said Sudeep Narayan, the Marketing and PR Director of Volvo Auto India. It is Volvo's first entry level car that has some unique attributes like park assist, active cornering lamps, 7-inch display with a reverse camera and start/stop technology. Facing such competition, it will be interesting to see how Mercedes-Benz B-Class makes its mark in the segment.