The German luxury car maker Mercedes-Benz has expressed that it has ultra sporty AMG cars under focus for the Indian auto market. With several AMG products already present: there is the C63 AMG, the SLS AMG with its gull-wing doors and the refined E63 AMG to be launched on July 25. The brand with three pointed star also has plans to make its AMG fleet of models to be easily accessible. 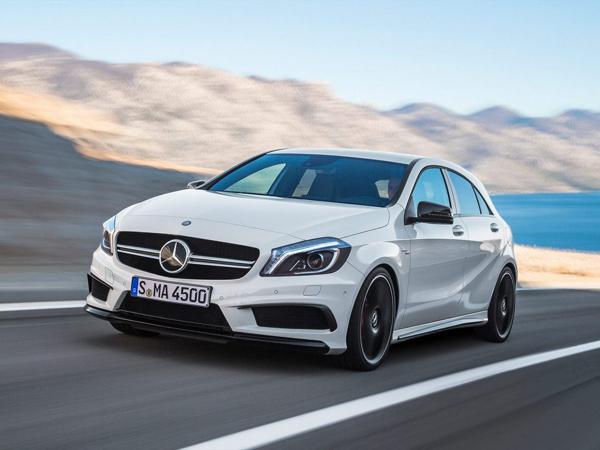 The car maker from Germany is aggressively working on putting A45 AMG cars in India, as the company tags this model “seriously quick”. The enormously powerful four-cylinder engine under the hood is what provides the car its sheer power and of course speed. The A45 AMG may only feature a 2000 cc petrol engine, but forced induction or turbocharging helps it attain the highest specific output among production car engines with a maximum power output of 355 bhp. The car has a four-wheel drive capability that offers greater traction and thus, allowing it to deliver a overwhelming performance. The model can smoothly glide from 0-100 kmph in just 4.6 seconds, plus quick as a genuine sports car with a top speed of 250 kmph.

Styling offered is accordingly sporty, with most of the chrome bright work blacked out, huge 18-inch wheels sat in the wheel arches and surrounded with enormous red brake callipers. Mercedes-Benz, however, could run into some red tape by importing the new A45 AMG. The law states that the car manufacturers can only import cars without homologating them in India if their Freight On Board (FOB) price is exceeding USD 40,000 and if the petrol engines are above 3,000 cc.

If the A45 AMG, at an approximate price of Rs. 52-55 lakh can not get around the homologation obstacle, the manufacturer also provided hints that it might come up with a special AMG variant of the offered car, specifically for India, possibly based on the earlier A250 Sport. AMG body kits have been utilised to offer a good effect on the C-Class and the M-Class models and this would act as a primary step on the new A-Class too. Stiffer springs and dampers are to be used and so is a plan for a powerful engine. The A250 Sport has a petrol engine similar to the new E200 sold in the Indian auto market. Even the power is also increased to 207 bhp, which is more than sufficient. From the predictions, there surely seems some delightful times ahead to come for the Mercedes-Benz in India.