Maruti has launched its first luxury small car in the Indian market. However, the company decided to phase out ‘Zen’ which stood for Zero Engine Noise. Now it’s only Maruti Estilo, a model name taken from Spanish meaning ‘Style’. Maruti is ready to launch Estilo in the Indian market with the new KB series engine and sleeker looks. The new model is stylish and more attractive than its former versions. However, the rear end still remains unchanged. 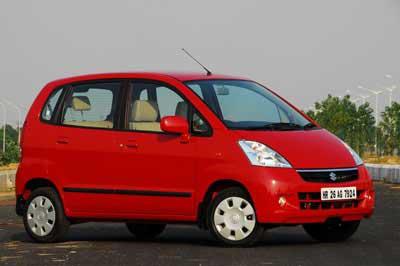 Maruti Zen Estilo was an instant runaway success ever since it was launched in 1993. The company continuously launched refurbished models since then and sold 8.8 lakh units till date. That’s an impressive sales figure amounting to 10 percent of the total sales figure for Maruti which has sold 81 lakh units in India so far. It was the fourth largest selling model for the company but the sales started to see a decline owing to fierce competition cropping up in the segment. According to the company officials, Zen brand did not fit into present times and it decided to phase out the brand Zen from the model name. But the new Estilo does not mercilessly do away with the Zen, the name is less pronounced and written in small letters on the car.

“The DNA of brand Zen and the DNA of the current products are not in sync. Therefore, we felt it was time for a change,’’ said Mayank Pareek, Maruti’s managing executive officer in-charge of marketing and sales.

The Estilo will be launched today. We will add photos of the new car as they become available.

Kizashis Fate for India Yet to Be Decided