Mahindra and Mahindra, the country's largest utility vehicle maker, has finally introduced a new hatchback Verito Vibe in the Indian auto market, amid great buzz. The model was launched on June 5 and is said to be a compact model of its Verito sedan with a price tag of Rs. 5.6 lakh. With this economical price tag, Mahindra Verito Vibe is counted among the cheapest passenger vehicles of the Indian market. In order to cater the demands of a large section of society, Vibe has been introduced in three different variants, which are all equipped with a same 1.5 litre diesel engine. Reportedly, this engine has already gained much appreciation as it is doing a good job on the Verito. 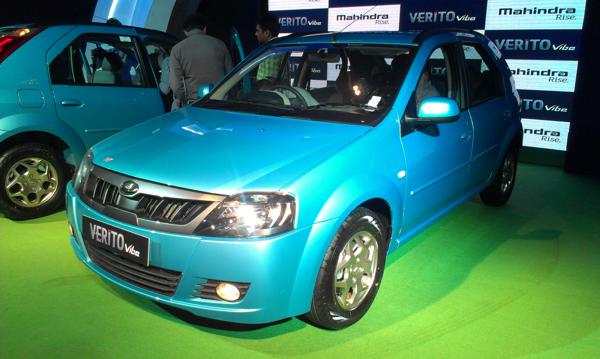 Owing to its small length and 1.5 litre diesel engine, the auto maker is entitled to avail the excise duty benefits on its newly introduced model. Expressing his views on the new model at the launch ceremony, the Head of Mahindra's Automotive Division, Pravin Shah was quoted as saying, “Verito Vibe gives us the opportunity to play in the large and highly competitive compact car segment.”

Although, the automotive arm of Mahindra Group is well known in the country for offering world class Sports Utility Vehicles (SUVs), its share in respective segment dipped to 48 per cent from 56 per cent in the fiscal, which ended in March 2013. Considering the sales in passenger car segment, which excludes vans and utility vehicles, the auto maker accounted for less than 1 per cent share in the entire market during last year. It must be noted that some industry experts are of a view that key to success for Mahindra is not in the small car, but more in SUVs.

An analyst at Mumbai-based Angel Broking, Yaresh Kothari said, “Mahindra will continue to lose market share in the overall passenger vehicle industry, because of lack of new launches (by Mahindra) in the SUV segment and an extremely competitive environment thanks to launches by their competitors.” The launch of a new model in the passenger car segment of the Indian auto market is likely to gather some attention from the masses. However, Mahindra needs to compete against the likes of established brands of this segment, like segment leader Maruti Suzuki Hyundai Motor, which both are doing a really good job.

Fiat to Acquire 100 per cent stake in Chrysler