Mahindra and Mahindra, the leading utility vehicle maker in India, has designed an enthralling television commercial sporting its much acclaimed Scorpio model, which is yet not aired. Reportedly, the model has carved a niche in the hearts of domestic buyers, since the time it was launched. The SUV was initially offered in 2002 and since then, it has received periodic changes with a number of changes in the equipment levels. The new advertisement of the auto maker starts with the burglary of a highly valued object from a museum. 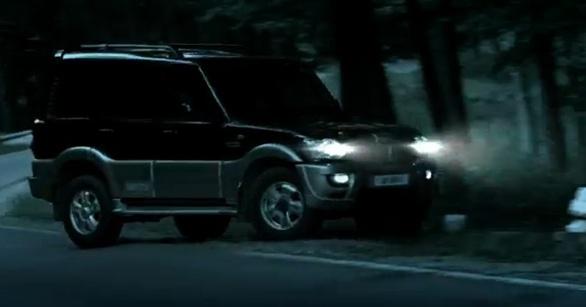 As showcased in the TVC, the offender runs away in his sports car for which the hero follows him in the Scorpio. He pursues the burglar on the curves of mountain and easily tows his vehicle back from where it all took place. With this event, the auto company has emphasised on the off roading credentials and optimum power of the Scorpio. Industry experts are of a view that the entire television commercial has been inspired from the style of James Bond, on the grounds of plot and sound affects. The movies and flicks of James Bond have always enticed the Indian audience, who have now developed a special penchant for action stuff. As M&M has designed the advertisement with Bond concept, it highlights the auto maker’s target towards country’s youths.

Interestingly, such kinds of shots have always delighted Indians of all ages. Experts said that although Scorpio is relatively an old model in the Indian auto market for over 10 years, its blend with action music and plot in the television commercial will surely overwhelm the audience. However, some auto analyst also said that the time for incorporating some tweaks has come for the Scorpio, besides introducing this much hyped TVC. But, it must be noted that the model has been receiving an overwhelming response from the Indian buyers as in February 2013, its sales figures taped over 4,000 units.

The flagship model has been equipped with a 2.2 litre mHawk CRDi engine, which churns out a peak power of 120 bhp, which is quite sufficient in its segment. The main highlight of Scorpio is its six-speed automatic transmission system, apart from the conventional five-speed manual gearbox. Since its inception in 2002, the model ahs emerged as a dominant player in the SUV segment of the Indian auto industry. In order to further cash on its legacy, the auto maker also introduced a pick-up designed on the Scorpio’s platform, which in turn came as a lucrative deal for M&M.