Lamborghini, the Italian super sports car maker, has finally launched its India Limited Edition Gallardo LP550-2 in the country amid great buzz. Priced at Rs. 3.06 crore (ex-showroom, Maharashtra, the model has been introduced as a part of 50th anniversary celebrations of Raging Bull. The India limited edition Gallardo has been offered in three different shades, namely pearl orange (Arancio Borealis), white (Bianco Monocerus) and pearl green (Verde Ithaca), which are the colours of country's national flag. 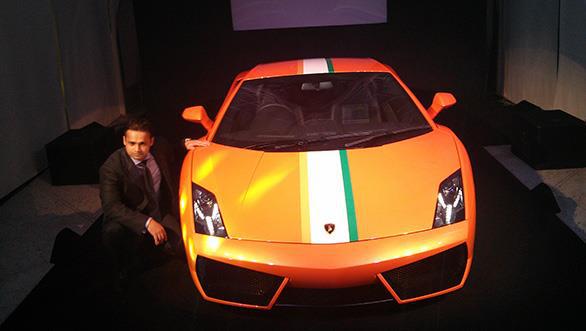 Expressing his views at the launch ceremony, the Head of Operations, Pavan Shetty said, “On the occasion of the 50th anniversary of celebrations of Automobili Lamborghini, the India limited edition Gallardo LP550-2 is our tribute to the strong relations we share and continue to enjoy with India.”

The India specific Gallardo is equipped with a 5.2 litre V10 engine, which churns out a maximum power of 538 bhp, along with a peak torque of 540 Nm. In order to channelise the power produced to the rear wheels, a six-speed dual clutch automatic transmission system has been equipped within the model. With this output, the model can smoothly glide from 0-100 kmph within just 3.9 seconds, further clocking a top speed of 320 kmph.

It must be noted that this India specific model continues to carry the theme of stripes, which are present on all the limited edition Gallardos. Moreover, the sports car maker has also provided all the six cars tricolour stripes to the model, running all over its length. Interiors of the recently launched model are predominantly black, which features orange stitching on the passenger seats, green on the driver’s seat and white for the centre console, dashboard as well as the doors. Interestingly, the new model of Lamborghini has joined the league of other limited edition models of the Gallardo series, like the Indonesia and Singapore Limited Editions, which both were introduced by the Italian auto maker its during golden jubilee celebrations.