Lexus has revealed the three-row variant of the RX crossover at the 2017 Los Angeles Auto Show. Christened as the RX L, the three-row RX can be had in both 350 and 450h guise. 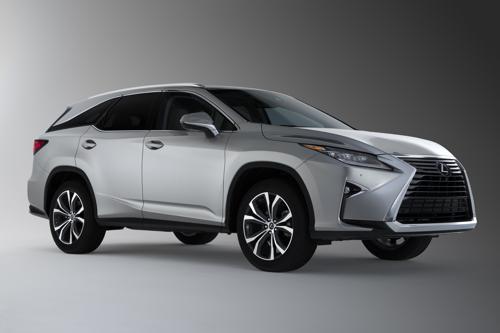 The RX L doesn’t look any bigger than the standard five-seater RX owing to the same wheelbase. However, the car is now longer by 4.3-inches while the roofline is more upright to accommodate the extra row of seats. The RX L can be had in either seven or eight seat configuration. Lexus boasts that the third row of the RX L models can offer the same comfort and luxury as the middle row.

The second row is positioned slightly higher to make way for leg room at the back. A three-zone climate control gives the third-row passengers individual air-con vents. The power-folding third-row seat, two cup holders and powered tailgate come as standard. There is a flat loading floor bed behind the third row for an even more practical package.

The RX 350L will be powered by the same 3.5-litre V6 with 290bhp and 356Nm of torque. The eight-speed automatic would channel power to either the front or both axles, depending on options. The 450hL hybrid variant will continue with the 3.5-liter V6 with a total output of 308bhp. The 450hL gets Lexus hybrid’s four-wheel-drive layout.

BMW officially reveals the i8 Roadster