The new Kawasaki Ninja 300 bike has been launched in the Indian two-wheeler market on April 10, 2013. This sports bike is here to add more value to the sports bike segment in this country. At present, it would compete against the KTM Duke 390, which is to be launched soon. 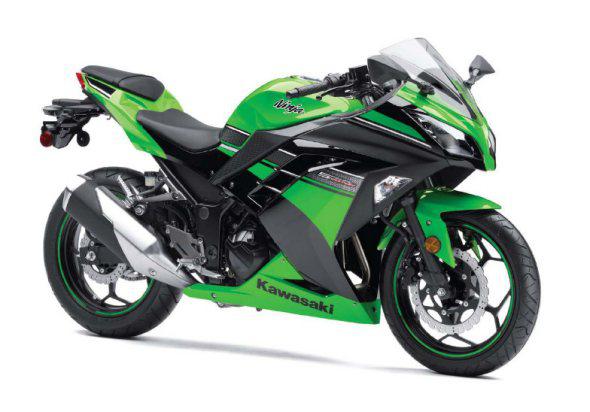 With a 296 cc engine under its belt, Kawasaki Ninja 300 has a maximum power of 38 bhp and peak torque of 27 Nm. Its liquid cooled twin cylinder engine has been arranged in a parallel configuration, which is mated to a 6-speed transmission with assist and slipper clutch. Interestingly, this clutch has been borrowed from bigger models, with an aim of preventing rear wheel lockups during quick downshift. The Ninja 300 is capable of attaining a top speed of 175 kmph, while accelerating from 0 to 100 kmph in less than 7 seconds.

Ninja 300 looks more sculpted look and has a twin headlamp, compared to the old 250. A part digital instrument panel has been installed in the new bike, instead of the old analogue unit, which does not have a digital fuel gauge. Overall, the front fascia in the Ninja 300 looks wider than the earlier 250 version.

Being a sports bike, the rear wheel is wider than the front wheel (140 mm against 110 mm) for better grip. A weight of 172 kg makes it easy to handle during high speed cornering. Both tyres on the bike are 17 inches in size. While the front gets 290 mm petal disc brake, the rear is fitted with 220 mm petal discs.

Three colours of the Kawasaki Ninja 300 are available- ebony, pearl stardust white and lime green (special edition). At a price of Rs. 3.50 lakh (ex showroom, New Delhi) it is surely more expensive than the Ninja 250, but with new changes, experts believe that enthusiasts will not mind paying extra for the overall package.