Jaguar is building a performance version of their entry-level sedan, the XE. Built by the Special Vehicle Operations division of the British marque, the XE SVR will join the likes of the Jaguar F-type and the Range Rovers. The XE SVR might debut at Frankfurt, the last of the European big-ticket Auto Shows and it certainly be a befitting showstopper. 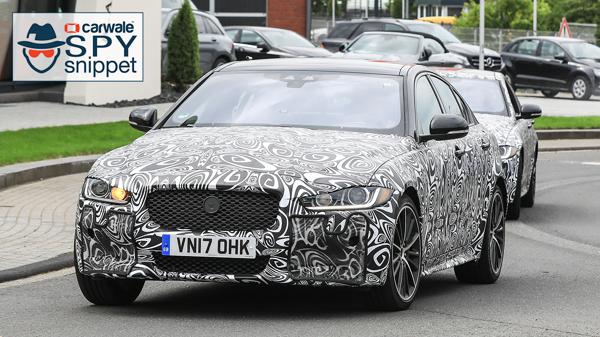 The XE SVR will be powered by the insane 5.0-litre supercharged V8, the SVO’s favourite engine. With 500bhp of power on tap, the XE SVR will look into biting the performance sedan pie dominated by the Mercedes C63 AMG and the BMW M3.

The rear-wheel drive eight-speed XE might become one of the fastest four-door luxury cars. There is also the Project 8, based on the XE and we are not yet sure if it’s the SVR or a blown out version of the XE SVR.

Looking at the prototype, it seems that Jaguar has almost reached the end of its development phase with the large air intakes visible in spite of the camouflage on the front bumper. The red brake callipers show the added stopping power and the quad exhausts in the back would sing the best of the V8 harmonies.