Isuzu Motors India Private Limited, a completely owned division of Japan-based Isuzu Motors Limited, has signed an agreement with the Indian major Hindustan Motors Limited for the production of Isuzu Sports Utility Vehicles (SUVs) and pick-up trucks in the domestic auto market. Reportedly, the components for manufacturing these models will be shipped from by Isuzu Motors from Thailand and will be then assembled in Hindustan Motors' plant in Thiruvallur, near Chennai (Tamil Nadu). 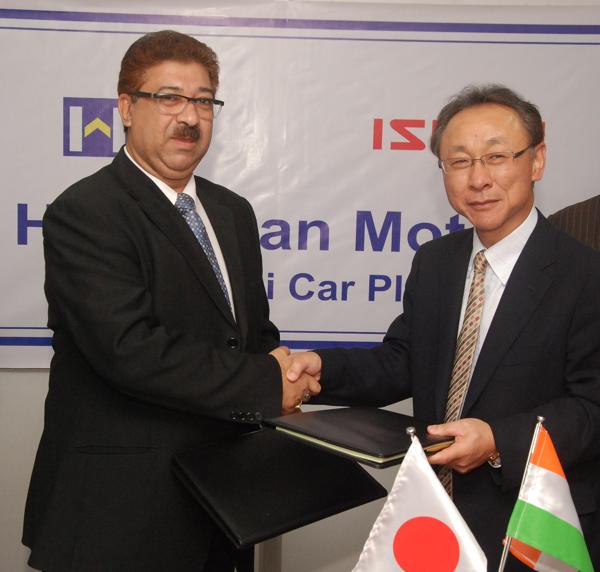 Expressing his views on this, the President of Isuzu Motors India Private Limited, Takashi Kikuchi was quoted as saying, “We are very confident about the growth prospects of the SUV and LCV market in India, notwithstanding the current slowdown. We are also very happy with the positive feedback of the market to our MU7 SUV and DMAX pick up truck, which we launched in Coimbatore and Hyderabad in March this year by importing these as CBUs from Thailand. We would now like to accelerate and carry forward this positive momentum and expand our sales operations in other parts of India, starting with the Southern region. The collaboration with Hindustan Motors will support us by carrying out assembly of our products at Thiruvallur which is about 70 km from Sri City, Andhra Pradesh, where our own local manufacturing facility is planned to come up. We can thereby advance the scope of our sales operations and increase the scale of supply volumes without waiting for our local manufacturing facility to be ready.”

He later said that Isuzu Motors and Hindustan Motors share a sound historical relationship and also know well each other in business terms. According to him, the Thiruvallur facility of Indian major is counted among the best auto manufacturing units of the country and can efficiently cope up with the standards of Isuzu Motors.

Speaking on this development, the Managing Director and Chief Operating Officer for Hindustan Motors, Uttam Bose said, “Our agreement for contract manufacturing of Isuzu’s globally renowned vehicles is a testimony to the state-of-the-art manufacturing facilities at our Thiruvallur plant. The operations will enable HML to optimally utilize its spare capacity at Thiruvallur and make eminent business sense at a time when the Indian economy and the automobile industry, in particular, are passing through testing times. Today’s agreement with Isuzu is a strategic move to keep Hindustan Motors on the growth path.”