On its official international Facebook page Renault S.A., a world renowned French multinational car maker, has introduced an innovative global brand awareness campaign for its Captur crossover. The 'Inter-Country Battle' will see worldwide Renault followers voting for a Captur model painted to be their national flag colours. The Renault Captur is a compact crossover and one of the most awaited new model launches from the French automotive giant. 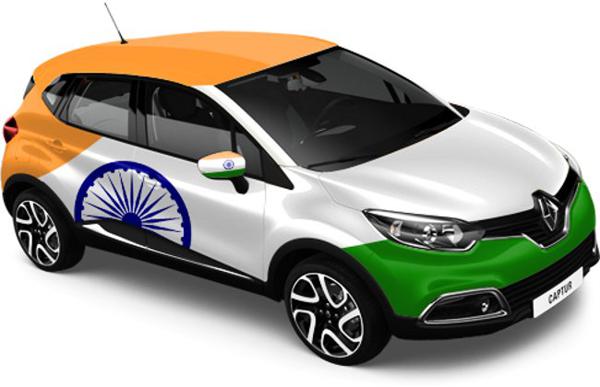 During the Inter-Country Battle on Renault's (Global) Facebook page, enthusiasts can vote between March 5 and March 17, 2013 in order to see their country flags on a Captur crossover. Further, attendees of the '13 Geneva Motor Show can also vote for the same. It is going to be interesting to see which nation has the most number of Renault's faithful followers. Expressing his views on the interesting Inter-Country Battle initiative, Florence de Goldfiem, Vice President (VP), Corporate Communications, Renault Group, has been quoted as saying, “The Inter-Country Battle is a new addition to the exclusive content that we offer fans of the international Renault Facebook page. The page currently has around 400,000 fans. This dynamic, innovative activity about our new crossover supports the launch of Captur by emphasizing the model’s unique design and universal appeal.”

The Inter-Country battle will see people voting for a select number of countries like India, Brazil, Italy, Spain, Romania, Germany, France, Great Britain, Algeria, Switzerland, Turkey, Argentina and Germany. Further, final results of the voting will be revealed on March 18, 2013. Post the voting process, final look of the Renault Captur will be showcased at major automotive events scheduled to take place in 2013.