Toyota had planned to launch LPG and CNG version of its popular Innova in India last year. It finally launched the car yesterday in India. It is the first energy efficient multi-purpose vehicle in India. Innova is already present in petrol version in the country. 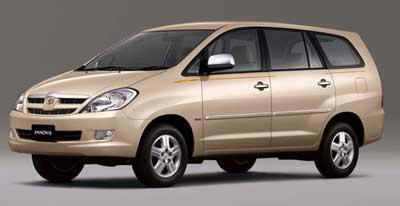 “Toyota is an environment conscious company committed to the cause of nurturing and protecting nature in its myriad forms. With CNG having established itself as an eco-friendly, reliable and economic fuel, TKM is pleased to announce India’s first ever energy efficient MPV in India. This is yet another step in our efforts to make the environment more inhabitable,” said Hiroshi Nakagawa, Managing Director, TKM.

Innova was launched in India in 2005 and has been one of the most popular multi-purpose vehicles in India. The new dual fuel model will use CNG as its fuel and offer an economic and environment friendly vehicle. The Innova comes with a 1998 cc, 16V DOHC VVTi petrol engine which is compatible with CNG. Driver can easily switch between the two fuel options with a manual switch. It has a capacity of carrying a 12 kg CNG cylinder and the running cost is expected to be around Rs. 1.6/ km. This means that the new CNG version will save 50 percent running cost over the diesel model.