Hyundai Motors India Limited, the country's largest exporter and second largest passenger car maker, is known to keep domestic audience engaged with its brand awareness initiatives. The South Korean auto maker is organising live screening of all cricket matches being played during the ongoing 2013 ICC Champions Trophy tournament, from June 6 to June 23 this year. The company has set up 'Hyundai ICC Fan Parks' at popular malls in seven major Indian cities, where the live screening of the matches is held. In keeping with the cricket fervour, Hyundai has also launched a special campaign, called ‘Blue by Heart’ to build a connect with young Indian cricket aficionados. 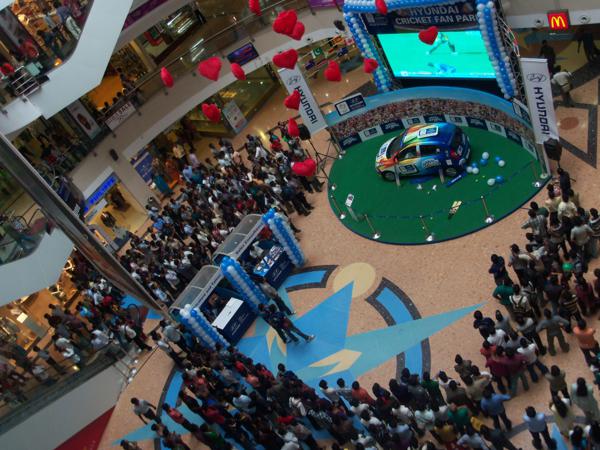 Hyundai is the official partner of International Cricket Council (ICC), the governing body of world cricket, and has been associated with the ICC Cricket World Cup tournaments as well. The Hyundai ICC Fan Parks are being held at Select City Walk and Ambience Mall in New Delhi, Infiniti Malad Mall in Mumbai, Express Avenue Mall in Chennai, Forum Value Mall in Bengaluru, Prasad I Max Mall in Hyderabad, South City Mall in Kolkata and Phoenix United Mall in Lucknow. At the above mentioned locations, the South Korean auto maker has installed giant screens for screening the cricket matches live, along with many other activities to keep people engaged. The Hyundai ICC Fan Parks have immensely become popular among domestic cricket enthusiasts. Hyundai Motor India has also set up live screening set ups at T3 terminal IGI Delhi and Hyderabad airports.