Mumbai, February 22, 2009: A joy ride in your favourite car and an opportunity to win fabulous prizes at the same time - Hyundai Owners could not have asked for a more appropriate Sunday morning. The rally found humongous response amongst its i10 Kappa customers with as many as 75 Hyundai cars participating in the rally.

The ‘Miles & Smiles Rally’ was organized by Hyundai Motor India for its valued i10 Kappa customers – to give them a chance to gauge the mileage of their car, learn the techniques of fuel efficient driving and also win prizes in the process. The rally was a unique way to forge a special bond between Hyundai and their precious clientele. The customers got an opportunity to have fun with their families while driving their favorite Hyundai car. 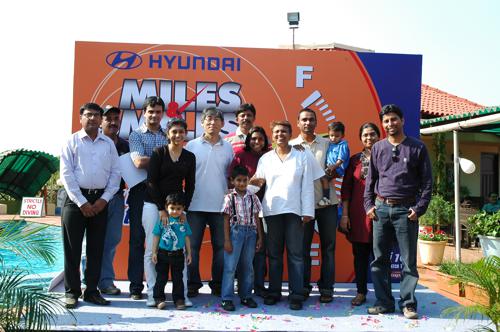 The concept of the rally was to promote fuel efficient driving habits among its i10 customers. Fossil fuel is becoming expensive and a sparse commodity, consequently judicious use of the fuel is a must, if we are to conserve this resource. In this, driving habits make a big difference. It not only contributes to savings on the part of the owners but also saves precious resources.

Before the start of the rally participants were briefed on the techniques of fuel efficient driving and driving styles which will improve the fuel efficiency of their vehicle considerably. The idea was simple, all participants tanked up at the nearby filling stations and their tanks were sealed which ensured that they could not refuel during the course of the rally.

Their trip meter was made Zero and the Odometer reading noted down by the organisers. To ensure absolute transparency the tank was filled up in the presence of the participants, sealed and entries were made in the log book. After this, they were flagged off on the rally. On return, the same procedure was followed. The amount of fuel consumed was measured and the participant who used the least amount of fuel was declared the winner. The rally covered an approximate distance of 110 Km.

All the customers assembled at Intercontinental The Lalit, Sahar Airport Road and the rally was flagged off by Mr J W Lee, Regional Manager, West Region at 9:30 am. The rally went via Mumbai - Pune Expressway upto Lonavala and culminated at The Dukes Retreat Resort. Drivers of i10 Kappa who got the best mileage out of their cars were given prizes. The winner of the rally Mr. Allan Prakash with the mileage of 37.5 got a prize of Rs 15,000/-. The first runners up Dr. Nikita Patel with the mileage of 36.34 and second runners up with mileage of Mr. Amit Sohani with the mileage of 35.92 received prizes worth Rs. 10,000/- & Rs. 5,000/- each.

The afternoon was as exciting as the morning with plenty of fun, games and prizes galore. The Miles & Smiles Rally is a first Hyundai i10 Kappa Mileage Rally organised by Hyundai Motor India after its national launch of i10 Kappa in July, 2008.