Ferrari, the iconic Italian super sports car manufacturer, has enthralled the global auto enthusiasts by unveiling the Enzo-successor called 'LaFerrari', a stunning super car at this year's edition of the Geneva Motor Show on March 5, 2013. The leading sports car maker has totally dominated the new car launches with its LaFerrari model in Geneva. 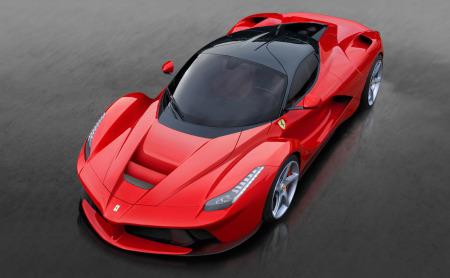 The LaFerrari super car is one of the most electrifying debuts at '13 Geneva auto salon and is built on a complete carbon fibre design and can reach a top speed in excess of 217 mph (or 350 kmph). The futuristic model is one of the most sophisticated hyper-hybrid sports cars powered by petrol and electric motors.

The LaFerrari is the latest street-legal super car made by the leading Italian sports automotive maker and its launch was eagerly awaited by the entire industry and enthusiasts across the globe. The exotic LaFerrari's most noticeable feature is its extensive usage of carbon fibre composites on the exterior body, which has helped it in reducing net body weight and increasing the overall structural strength.

Coming to under-the-hood specifications of LaFerrari, the super sports car is powered with a 6.3 litre V12 petrol engine coupled to a powerful electric motor. Both petrol and electric power-mills generate an astonishing combined power output of 963 bhp, which makes LaFerrari one of the quickest Ferrari models ever to grace the surface of the earth. As per reports, only 499 LaFerarri super cars will be made by the Italian super sports car maker, with one confirmed buyer in the form of Sergio Marchionne, Chief Executive Officer, Fiat Group- the parent firm of Ferrari.